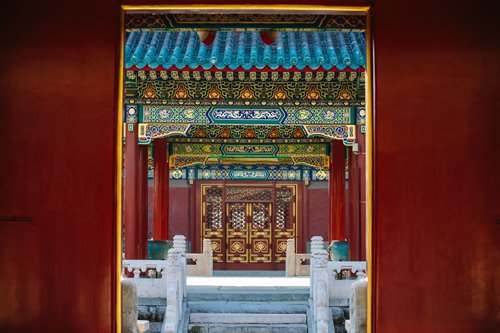 A gate at the Forbidden City in Beijing Photo: Li Hao/GT

"My family is from the south, but I was born in the north. I've lived in many traditional courtyard homes in Beijing … but I never thought my last job before I retire would be at the door of Beijing's largest courtyard home," Shan Jixiang, director of the Palace Museum, told the Global Times.

Dressed in a neat suit and a pair of sneakers, Shan sat down for an interview with the Global Times at the newly restored Jianfu Palace - one of the many palaces in the ancient Forbidden City that has been restored over the past 15 years. According to Shan, by 2020 - the 600-year anniversary of the establishment of the Forbidden City - the museum will present a brand new face to the public as all the palaces will have been restored. Into the 21st century

Having been the "gatekeeper" of the Forbidden City for six years now, Shan has brought many changes to the world's largest imperial complex.One change has been service. "We highly encourage every employee to come to the museum as a visitor during their off-time," said Shan. "That way you can see what things will stop you from having a good time while visiting." Based on their own visiting experiences, the Palace Museum renovated its facilities by adding amenities such as tailor-made chairs for visitors and new guideposts to help them get where they want to go. The application of modern technology and Internet integration has also helped move the museum into the 21st century. For instance, the museum's digitization efforts now offer visitors a window to view the museum's 1,862,690 relics from the comfort home. In October, the museum implemented online ticket booking as a way to control the flow of the more than 10 million annual visitors that come to the museum every year. By spreading out visitor traffic more evenly between peak and off seasons, the museum has been able to reduce wait times at the Forbidden City's ticket windows.  Not content to wait for visitors to come to them, the Palace Museum has made its way to the small screen through the documentary show Masters in Forbidden City, which Shan helped produce. The 63-year-old Shan has also been appearing in numerous interviews with major news programs, which has led to him becoming something of a pop idol among 20-something viewers for his easy-going style in introducing the history of the Forbidden City and the museum's collection. Numerous comments about Shan can be found on Chinese social media.  "I am a die-hard fan of Shan!" netizen Zhang Hong wrote on Sina Weibo. 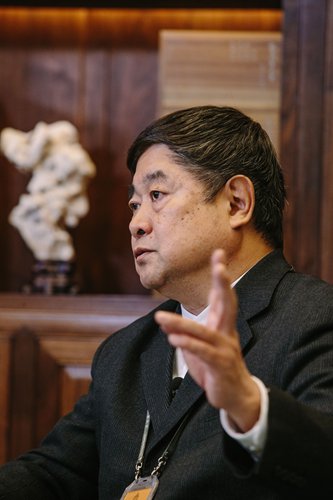 Taking it with youLately, using decorative adhesive tape from the Palace Museum to wrap up boxes and such has become popular with young Chinese. Developed from elements in the former imperial palace and its collection of relics, the tape is just one of the many derivative products that the museum has produced in recent years. "About three to four years ago, we began to pay attention to the souvenirs on sale at the museum and found that 85 percent of them had nothing to do with the museum itself," Shan said, explaining that such products could not meet visitors' desires to bring a piece of Palace Museum back home with them. Noticing that the replicas of some of the items on display at the museum were not selling well, Shan realized that they needed to start selling items that people could use in their daily lives. Updated every month, Shan said that by the end of this year they will be selling more than 50,000 types of derivative products.   Connecting the world Joining hands with international organizations when it comes to collaborative activities such as holding exhibitions and academic research, the museum is playing an increasingly prominent role on the world stage. According to Shan, in the past when Europe and the US were in a dominate position, museums from these places were seen as world's top museums, but this is changing now that the Palace Museum has started taking a more active role in global cultural undertakings.   For example, both the International Council of Museums and the International Institute for the Conservation of Historic and Artistic Works have established their only training institutions at the Palace Museum. "To date we have trained trainees from 67 countries and regions for the council and trainees from over 20 countries and regions for the latter," Shan said. Shan has visited museums around the globe. During a tour to Afghanistan in 2015, he realized the damage that war had caused local relics, this made him aware of the need to establish an alliance for the protection of the world's cultural heritage. In 2016, a forum focused on the protection of ancient civilizations was held at the Palace Museum. About 50 representatives from eight countries - China, Egypt, Iraq, Iran, India, Greece, Italy and Mexico - took part. The Declaration of Supreme Harmony, a document in which the eight nations promised their support in protecting global culture, was signed after that.  In September of this year, the first Harmony Forum on Protecting the World's Ancient Civilizations was launched. This time the number of participating countries and regions reached 21. "We wish to make the forum a regular event that will unite our power to protect civilizations," Shan said.