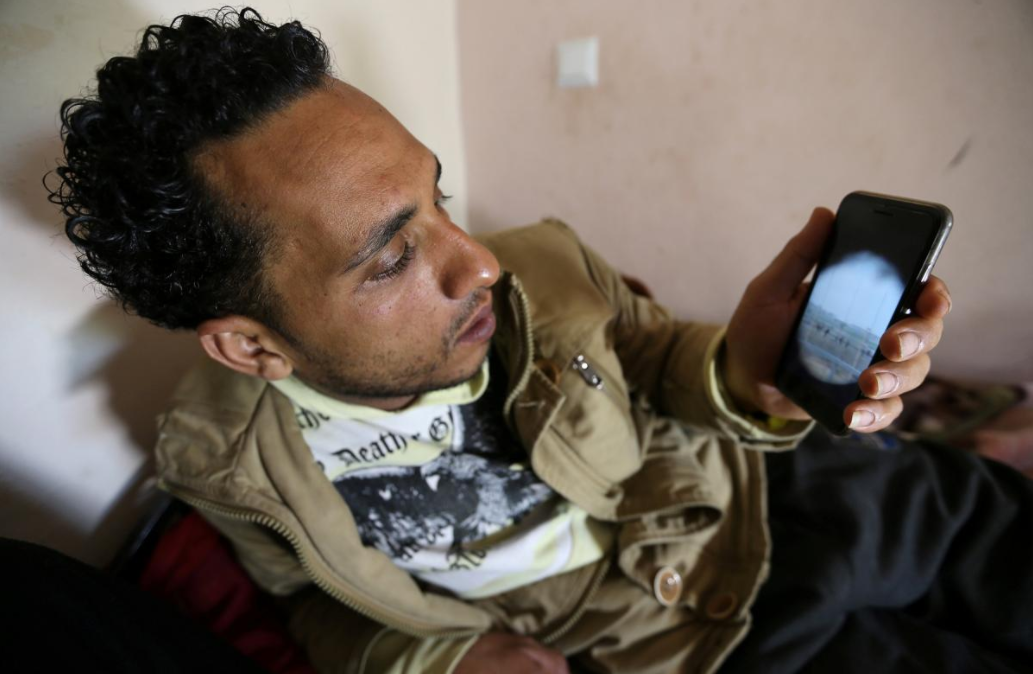 Palestinian man Tamer Abu Daqqa, who said that he was the man whose shooting by an Israeli sniper was captured on a leaked video, shows the incident video inside his home in Khan Younis in the southern Gaza Strip April 11, 2018 (Photo: Reuters)

A 28-year-old Palestinian said on Wednesday that he was the man whose shooting by an Israeli sniper was captured on a leaked video, and he denied the army’s allegations that he had been organizing a violent demonstration at the Gaza border.The 81-second video clip, taken by a soldier, surfaced on social media on Monday and stirred debate and censure for showing the targeting of a Palestinian who appeared to be standing still, to the sound of approving shouts and profanity by at least one Israeli soldier.

Israel said on Tuesday that while the army would take disciplinary action over the taping of the Dec. 22 incident and dissemination of the video, the sniper had acted appropriately against a suspected ring-leader of a “riot” at the Gaza fence.

But Tamer Abu Daqqa, an unemployed resident of Khan Younis in the southern Gaza Strip, said he was shot while trying to help other Palestinians escape Israeli army fire.

“There were a few youths lying on the ground, apparently afraid of leaving the area,” he told Reuters. “I began moving in their direction and called out to them that I was coming, so that they would be brave, and then the Jews shot me.”

A photograph of Abu Daqqa showed him on a hospital gurney, wearing a jacket and shirt that appeared to match those of the person shot in the video. His medical records describe a live bullet wound to the leg - which appeared to correspond to the army’s account of its sniper’s target in the fence incident.The video - taken from behind an elevated sand dune - does not show youths lying on the ground, however.

“I was standing with other people when I was hit in my leg, I was not throwing stones or anything,” he told Reuters. “They shot me and later they laughed at me. They cursed my mother. I can sue them for that.”

The Israeli military has stationed sharpshooters to enforce a no-go zone near the border and stop Palestinian attempts to breach the fence during a protest that has been called “The Great March of Return”. Thirty protesters have been killed.

The demonstrations are expected to escalate before the planned opening of a new US embassy in Jerusalem on May 14, coinciding with Israel’s 70th anniversary celebrations.

The protesters are reviving a long-standing demand for the right of return of Palestinian refugees and their descendants to towns and villages from which families fled, or were driven out, when the state of Israel was created in 1948.