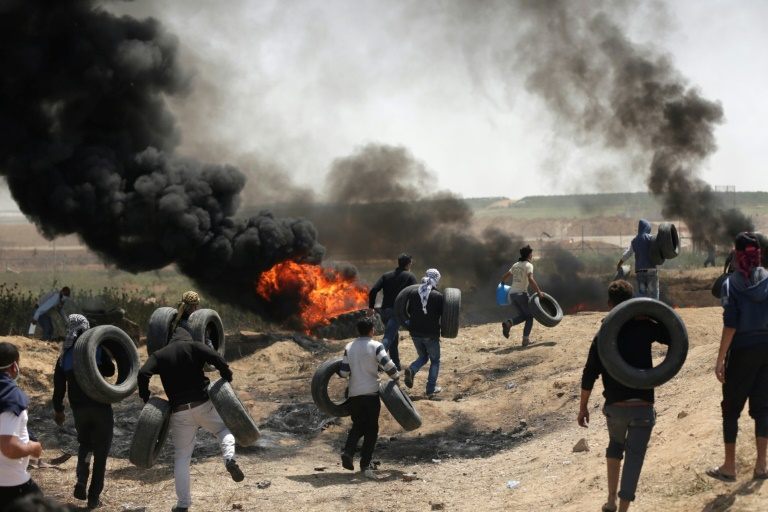 Palestinians collect tyres and burn them during protests at the Israel-Gaza border east of Gaza City, on April 6, 2018.(Photo: AFP)

A Palestinian was killed by Israeli gunfire on Friday as thousands protested and clashes erupted along the Gaza border a week after a similar demonstration led to the bloodiest day since a 2014 war.

Gaza's health ministry also reported that around 40 Palestinians were wounded by around mid-afternoon.

Palestinians burned mounds of tyres and threw stones at Israeli soldiers over the border fence, who responded with tear gas and live fire.

Thousands of protesters gathered in locations near the border east of Khan Yunis, in the south of the blockaded Palestinian enclave, and east of Gaza City.

The number of protesters was however much lower than last week, when a demonstration by tens of thousands led to clashes in which Israeli forces killed 19 Palestinians.

The tyre fires were meant to be a smokescreen from Israeli snipers, and thick black smoke covered the border area in some places.

Israeli forces took up positions across a ridge on the other side of the border and set up large fans in an apparent bid to push away the smoke.

They also used water canon to try to douse some of the flames.

"I will be a martyr today. I will cross the border," Ahmed Abu Ghali, 20, who held up his shirt to show his still seeping wound from last week that required 40 stitches.

"I was wounded last Friday but escaped yesterday from hospital," said the protester at the rally east of Khan Yunis.

Israel's military said there had been "rioting" in five locations along the border.

It added that "troops are responding with riot dispersal means, and fire in accordance with the rules of engagement".

Israel had warned that its open-fire rules would remain unchanged for Friday's protests, pledging to stop any damage to the fence and prevent infiltrations or alleged attacks.

But it has faced mounting criticism over its use of live fire, and UN chief Antonio Guterres called for restraint.

"I particularly urge Israel to exercise extreme caution with the use of force in order to avoid casualties. Civilians must be able to exercise their right to demonstrate peacefully," he said in a statement.

In last Friday's demonstration, a number strayed from the main protest and approached the heavily fortified fence on the border with Israel.

Israel says troops opened fire only when necessary against those throwing stones and firebombs or rolling burning tyres at soldiers.

It said there were attempts to damage the fence and infiltrate Israel, while alleging there was also an attempted gun attack against soldiers along the border.

It accuses Hamas, the Islamist movement that runs the Gaza Strip and with whom it has fought three wars since 2008, of using the protests as cover to carry out violence.

But the toll of those killed and wounded on March 30 -- more than 750 people were injured by gunfire, according to Gaza's health ministry -- has led to criticism of Israel.

There were no Israeli casualties.

Palestinians say protesters were shot while posing no threat to soldiers, and unverified videos that have spread online have fuelled their accusations.

The videos include one appearing to show a man with a tyre shot while running away from the fence.

Human Rights Watch has called the actions by the Israeli soldiers "calculated" and illegal.

Guterres and the European Union have called for an independent investigation, which Israel has outright rejected.

Israel says more than half of the dead from the previous Friday were members of militant groups, including the armed wing of Hamas.

Hamas's armed wing has claimed only five of them, saying they were participating "in popular events side-by-side with their people".

Militant group Islamic Jihad has claimed at least one of the dead as a member, but it said he was not carrying a weapon when he was shot.

Hamas has meanwhile offered compensation of $3,000 to the families of protesters killed and $500 for those seriously injured, drawing outrage from Israel.

The protests, designed to last six weeks, are in support of refugees, including those in the Palestinian enclave who want to return to their former homes in what is now Israel.

More than 700,000 Palestinians fled or were expelled from their lands during the war surrounding Israel's creation in 1948.

Israelis say allowing the so-called "right of return" would mean their country would cease to exist.

Protests will run until the expected opening of the new US embassy in Jerusalem in mid-May.

The US move has led to deep anger among Palestinians, who see the annexed eastern sector of Jerusalem as the capital of their future state.

The White House on Thursday refrained from criticism of Israel and called on protesters to remain peaceful.

President Donald Trump's envoy Jason Greenblatt said protesters "should remain outside the 500-metre (-yard) buffer zone; and should not approach the border fence in any way or any location".