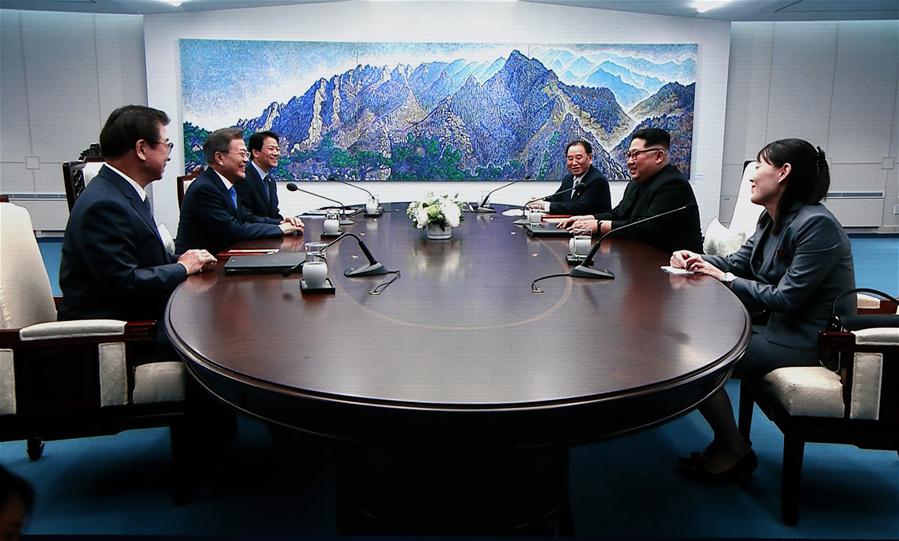 The declaration, Panmunjom Declaration for Peace, Prosperity and Unification of the Korean Peninsula, confirms their common goal of complete denuclearization of the peninsula.

Here are the key points from the official English language version of the statement, which aims to open a new era of peace, prosperity and unification in the Korean Peninsula.

"During this year that marks the 65th anniversary of the Armistice, South and North Korea agreed to actively pursue trilateral meetings involving the two Koreas and the United States, or quadrilateral meetings involving the two Koreas, the United States and China with a view to declaring an end to the War and establishing a permanent and solid peace regime."

"The two leaders agreed, through regular meetings and direct telephone conversations, to hold frequent and candid discussions on issues vital to the nation, to strengthen mutual trust and to jointly endeavour to strengthen the positive momentum towards continuous advancement of inter-Korean relations as well as peace, prosperity and unification of the Korean Peninsula. In this context, President Moon Jae-In agreed to visit Pyongyang this fall."

"South and North Korea agreed to endeavour to swiftly resolve the humanitarian issues that resulted from the division of the nation, and to convene the Inter-Korean Red Cross Meeting to discuss and solve various issues including the reunion of separated families. In this vein, South and North Korea agreed to proceed with reunion programs for the separated families on the occasion of the National Liberation Day of August 15 this year."

"On the international front, the two sides agreed to demonstrate their collective wisdom, talents and solidarity by jointly participating in international sporting events such as the 2018 Asian Games."

"South and North Korea agreed to carry out disarmament in a phased manner, as military tension is alleviated and substantial progress is made in military confidence-building."

"The two leaders solemnly declared before the 80 million Korean people and the whole world that there will be no more war on the Korean Peninsula and thus a new era of peace has begun."