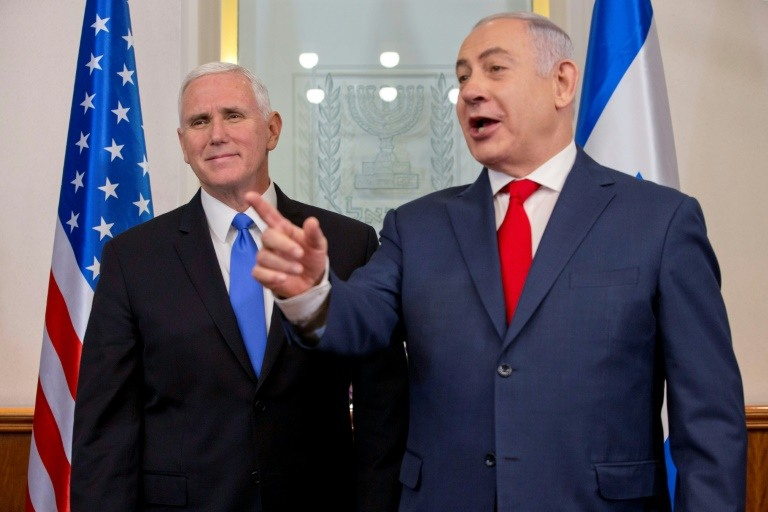 US Vice President Mike Pence pledged to move the American embassy in Israel to Jerusalem by the end of 2019 on Monday in a speech to Israel's parliament that saw Arab lawmakers expelled after they shouted in protest.

Referring to the 1948 founding of Israel, he said US President Donald Trump's decision to recognise Jerusalem as the country's capital last month "righted a 70-year wrong".

The decision has drawn near global condemnation and deeply angered the Palestinians, who have refused to meet with Pence on his visit.

"In the weeks ahead, our administration will advance its plan to open the United States embassy in Jerusalem," Pence said.

"And that United States embassy will open before the end of next year."

As Pence was set to begin his speech, a group of around a dozen Arab Israeli lawmakers shouted in protest, with some holding signs saying Jerusalem is the capital of Palestine.

They were escorted out by security agents as Netanyahu and others stood and applauded their expulsion.

Saeb Erekat, secretary-general of the Palestine Liberation Organisation, denounced Pence's speech as "messianic" and a "gift to extremists".

Pence's visit, initially scheduled for December before being postponed, is the final leg of a trip that has included talks in Egypt and Jordan as well as a stop at a US military facility near the Syrian border.

Arab outrage over Trump's Jerusalem decision on December 6 had prompted the cancellation of several planned meetings ahead of Pence's tour.

Abbas and other Palestinian leaders refused to meet Pence, making his visit a rare one by a high-ranking US official not to include talks with the Palestinians.

Israel has enthusiastically welcomed the vice president, with Netanyahu calling him a "dear friend" and praising what he described as the strongest ever ties between the two countries.

Earlier Monday, Pence was given a ceremonial welcome in a tent outside Netanyahu's office, with an honour guard and military band.

In remarks afterwards, Pence said he was "hopeful that we are at the dawn of a new era of renewed discussions to achieve a peaceful resolution to the decades-long conflict that has affected this region."

On Tuesday, Pence, a devout Christian, will visit Jerusalem's Western Wall, one of the holiest sites in Judaism.

Trump became the first sitting US president to visit the site when he travelled to Jerusalem in May 2017.

The site is located in east Jerusalem, occupied by Israel in the 1967 Six-Day War and later annexed in a move never recognised by the international community.

The city's status is perhaps the most sensitive in the Israeli-Palestinian conflict, and the Palestinians' reaction to Trump's recognition was an illustration of the importance placed upon it.

Beyond refusing to meet Pence, Abbas has said the United States can no longer serve as mediator in negotiations and denounced Trump's peace efforts as the "slap of the century".

The Palestinians were planning a general strike on Tuesday to protest Trump's declaration.

Unrest since the announcement has left 18 Palestinians dead, most of them killed in clashes with Israeli forces. One Israeli has been killed in that time.

In his speech to parliament, Pence said "we strongly urge the Palestinian leadership to return to the table. Peace can only come through dialogue."

The 82-year-old Abbas said in Brussels that "we are keen on continuing on the way of negotiations because we believe it is the only way forward to reach a negotiated solution and peace between us and Israel."

He has however pushed for an internationally led process.

Netanyahu appeared more interested in talking with Pence on other issues, including Iran, Israel's main enemy.

Pence dedicated part of his speech to Iran, saying the United States "will never allow" it to acquire a nuclear weapon and pledging to "work with Israel and with nations across the world to confront the leading state sponsor of terror."

The US move to recognise Jerusalem as Israel's capital broke with decades of international consensus that the city's status should be settled as part of a two-state peace deal between Israel and the Palestinians.

Israel claims all of Jerusalem as its capital, while the Palestinians see the eastern sector as the capital of their future state.

Israelis and Palestinians alike interpreted Trump's move as Washington taking Israel's side in the conflict -- a view reinforced by the White House's recent decision to withhold financing for the UN agency for Palestinian refugees.

In Jerusalem, Pence repeated Trump's view that the United States will support a two-state solution to the Israeli-Palestinian conflict "if both sides agree."