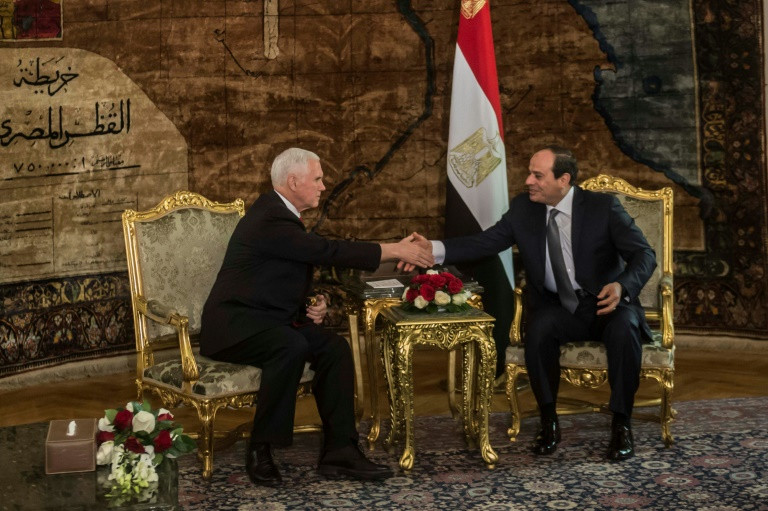 Controversy over President Donald Trump's decision to move the American embassy in Israel to Jerusalem had led to the cancellation of a number of planned meetings ahead of the trip originally scheduled for December.

The Palestinian leadership, already furious over the Jerusalem decision, has denounced the US administration and had already refused to meet Pence in December.

A coalition of Arab parties in the Israeli parliament said Saturday it would boycott a speech by Pence on Monday, calling him "dangerous and messianic".

Pence held talks with former army chief Sisi in Cairo that were expected to focus on US aid and security, including a jihadist insurgency in the Sinai Peninsula.

Sisi's office said the talks also covered Jerusalem, with the president stressing Egypt's support for a two-state peace settlement and "the right of the Palestinian people to establish an independent state with east Jerusalem as capital".

Pence, for his part, said relations between Cairo and Washington had "never been stronger" thanks to the leadership of Trump and Sisi.

Expressing sympathy for deadly jihadist attacks that have targeted both Muslim and Christian places of worship, he said: "We stand shoulder-to-shoulder with you in Egypt in the fight against terrorism."

The vice president later travelled on to Amman ahead of a one-on-one meeting with King Abdullah II on Sunday before heading to Israel for the final leg of the tour.

Pence went ahead with the trip -- which had been pushed back in December as a crunch tax vote loomed on Capitol Hill -- despite the federal government shutdown looming over Washington.

The leaders of both Egypt and Jordan, the only Arab states that have peace treaties with Israel, would be key players if US mediators ever manage to get a revived Israeli-Palestinian peace process off the ground, as Trump says he wants.

They are also key intelligence-sharing and security partners in America's various covert and overt battles against Islamist extremism in the region, and Egypt is a major recipient of aid to help it buy advanced US military hardware.

Sisi, one of Trump's closest allies in the region, had urged the US president before his Jerusalem declaration "not to complicate the situation in the region by taking measures that jeopardise the chances of peace in the Middle East".

Egypt's top Muslim cleric and the head of its Coptic Church had both cancelled meetings with Pence in December in protest at the Jerusalem decision.

After Jordan -- the custodian of Muslim holy sites in Jerusalem -- Pence will head to Israel for talks with Prime Minister Benjamin Netanyahu on Monday.

He will also deliver a speech to parliament and meet President Reuven Rivlin during the two-day visit.

Pence can expect a warm welcome after Trump's decision on Jerusalem, which Israelis and Palestinians alike interpreted as Washington taking Israel's side in the dispute over the city.

Israel occupied the West Bank in 1967 and later annexed east Jerusalem in a move never recognised by the international community.

Israel claims all of Jerusalem as its united capital, while the Palestinians see the eastern sector as the capital of their future state.

The international community considers east Jerusalem illegally occupied by Israel and currently all countries have their embassies in the commercial capital Tel Aviv.

The State Department has begun to plan the sensitive move of the American embassy to Jerusalem, a process that US diplomats say may take years to complete.

This week reports surfaced that Washington may temporarily designate the US consulate general in Jerusalem as the embassy while the search for a secure and practical site for a long-term mission continues.

A senior State Department official, speaking on condition of anonymity, told reporters that Secretary of State Rex Tillerson has yet to make a decision on either a permanent or interim location for the mission.

"That is a process that takes, anywhere in the world, time. Time for appropriate design, time for execution. It is a matter of years and not weeks or months," he said.

Pence -- himself a devout Christian -- will visit the Western Wall, one of the holiest sites of Judaism in Jerusalem's Old City, and pay his respects at the Yad Vashem Holocaust memorial.