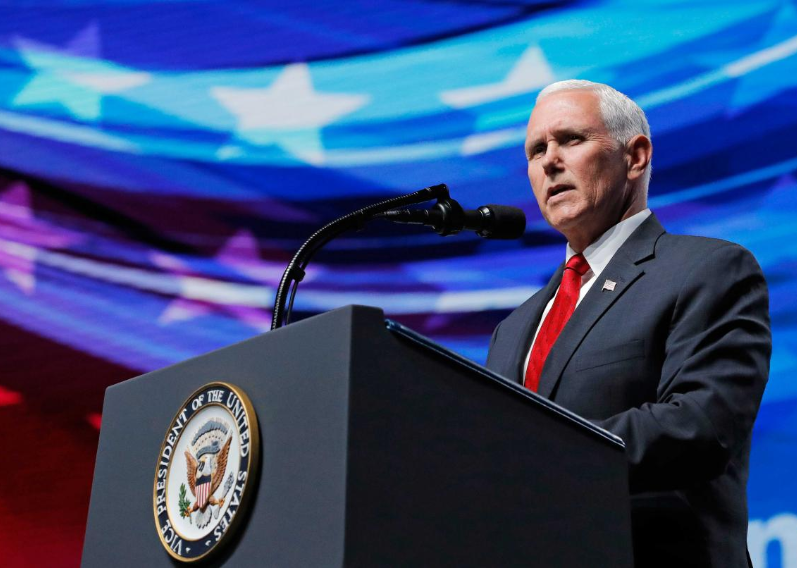 US Vice President Mike Pence speaks at a National Rifle Association (NRA) convention in Dallas, Texas, US May 4, 2018 (Photo: Reuters)

US Vice President Mike Pence is set to announce new sanctions on Venezuela in a speech to the Organization of American States on Monday, an aide to Pence said.

The aide, who spoke on condition of anonymity, declined to provide details about the sanctions ahead of the speech, which was schedule to begin at 1:25 p.m. EDT.

A separate source said new sanctions would be significant and have a “real financial impact.”

Pence also is expected to call for a delay in Venezuela’s presidential election, set for May 20, in his speech, the aide said.

Venezuela’s Information Ministry did not immediately respond to a request for comment.

Pence previously has urged the international community to increase pressure on Venezuela’s socialist President Nicolas Maduro, who the United States blames for the deep recession and hyperinflation that has caused shortages of food and medicine and a flood of migrants into neighboring countries.

The Trump administration also has been weighing new oil-related sanctions on a Venezuelan oil services company and on insurance coverage for tankers carrying Venezuelan oil.

The announcement comes as oil prices rose to their highest levels since late 2014 on Monday, boosted by fresh troubles for Venezuelan oil company PDVSA and a looming decision on whether the United States will reimpose sanctions on Iran over its nuclear program.