Assistant to the Secretary of Defense for Public Affairs Dana W. White (L) and Director of the Joint Staff Lt. Gen. Kenneth McKenzie (R) on a press briefing on April 14, 2018.

Chief Pentagon spokeswoman Dana White said Saturday that the strikes were launched to "cripple Syria's ability to use chemical weapons in the future." 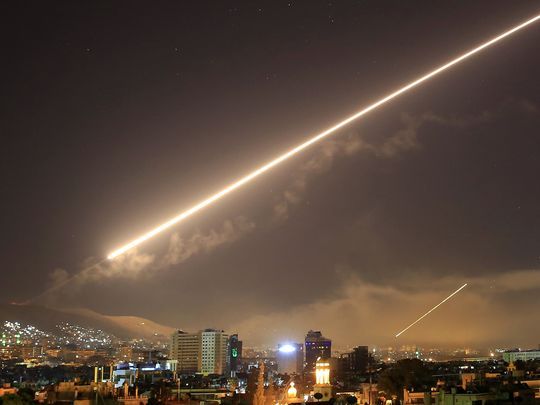 The US, France and Britain launched military strikes in Syria on Friday night to punish President Bashar Assad for a suspected chemical attack against civilians last week and to deter him from doing it again. 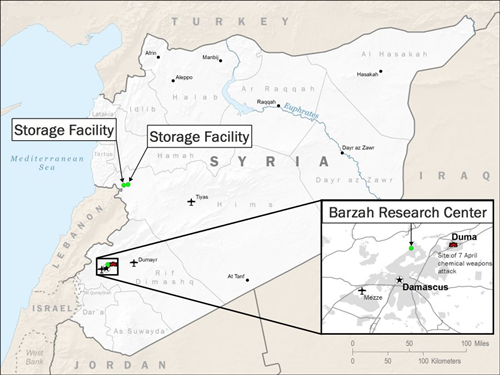 The three targeted positions on map.

White says the strikes do not "represent a change in US policy or an attempt to depose the Syrian regime." But she says, "We cannot allow such grievous violations of international law."

She also called on Russia to "honor its commitment" to ensure the Assad regime dismantles chemical weapons.

Prior to the Pentagon’s briefing, US President Donald Trump claimed in a tweet that the strikes have been "perfectly executed."

The Pentagon said the allied strikes against chemical-attack related targets are "precise, overwhelming and effective" and will set Syrian chemical program back for years.

“None of our aircraft or missiles involved in this operation were successfully engaged by Syrian air defenses,” disclosed Lt. Gen. Kenneth McKenzie, the director of the Joint Chiefs of Staff at the Pentagon,at the briefing.

He said the three targets hit in the air strikes are the best options that could both minimize collateral damage to civilians and send strong message to Assad regime.

A Russian “disinformation campaign” has already begun over the allied strikes and “there has been a 2,000 percent increase in Russian trolls in the past 24 hours,” said White.

As to the future measures the US may take, She said it will be decided by what Assad government would do with the chemical weapons.