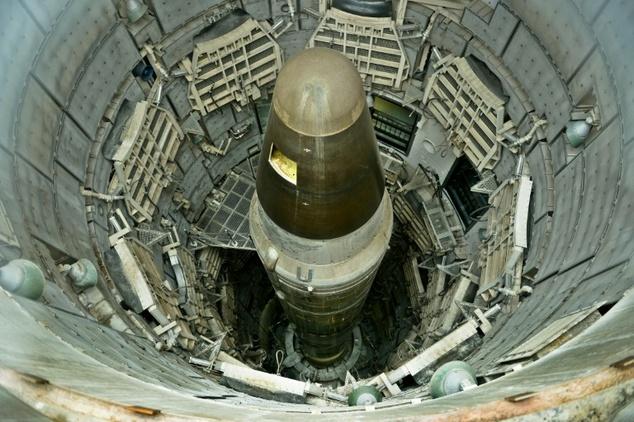 The US Defense Ministry on Friday officially published the 2018 Nuclear Posture Review (NPR), the guiding principle for the future US policy seeking enhanced nuclear deterrent which is already the world's most powerful.

"The United States now faces a more diverse and advanced nuclear-threat environment than ever before, with considerable dynamism in potential adversaries' development and deployment programs for nuclear weapons and delivery systems," the document claimed.

The comprehensive report, which is largely in line with the 2010 review done by the Obama administration, reaffirms commitments to non-proliferation treaties but emphasizes the need to enhance capabilities to match with Russia, showing supports for US nuclear modernization projects.

The review, the first of this kind since 2010, also calls for a "lower-yield" option with less powerful explosive capacity for ballistic and cruise missiles launched from submarines.

The lower-yield weapons would enhance the credibility of the US arsenal, the review claims. It also says that nuclear weapons could be used to respond to "extreme circumstances," including non-nuclear attacks.

Elisabeth Braw, a researcher with the Atlantic Council, said: "While the Nuclear Posture Review may contain no radical departures from the Obama administration's nuclear policy, the public debate is already focusing on the low-yield nuclear weapons."

"The European public will see this as another dangerous Trump policy at an already tense time in the transatlantic relationship," he added.

"The US nuclear arsenal remains the largest and most capable in the world, consisting of thousands of warheads loaded on intercontinental ballistic missiles and submarines-launched ballistic missiles, along with nuclear bombs and cruise missiles carried by long-range bombers," Tony Fleming of the Arms Control Association told Xinhua.

"Most of these warheads are of the type that can destroy entire cities, but the US also deploys bombers in Europe that are capable of dropping bombs with lower explosive yields," Fleming said, warning that any US nuclear buildup may lead to "a renewed arms race and a more dangerous world."

According to the review, the US will sustain its strategic nuclear triad systems, largely deployed in the 1980s or earlier, until the planned replacement programs are deployed.

The United States has also initiated the Ground-Based Strategic Deterrent (GBSD) program to begin the replacement of Minuteman III in 2029. The GBSD program will also modernize the 450 ICBM launch facilities that will support the fielding of 400 ICBMs.

The current US non-strategic nuclear force consists exclusively of a relatively small number of B61 gravity bombs carried by F-15E and allied dual capable aircraft (DCA). The United States is incorporating nuclear capability onto the forward-deployable, nuclear-capable F-35 as a replacement for the current aging DCA.

The review requires an "investment in a credible nuclear deterrent with diverse capabilities," chief Pentagon spokesperson Dana White said one day before its publication.

The review, aligned with the National Defense Strategy and the National Security Strategy, came nearly one year after US President Donald Trump signed an executive order directing the review.