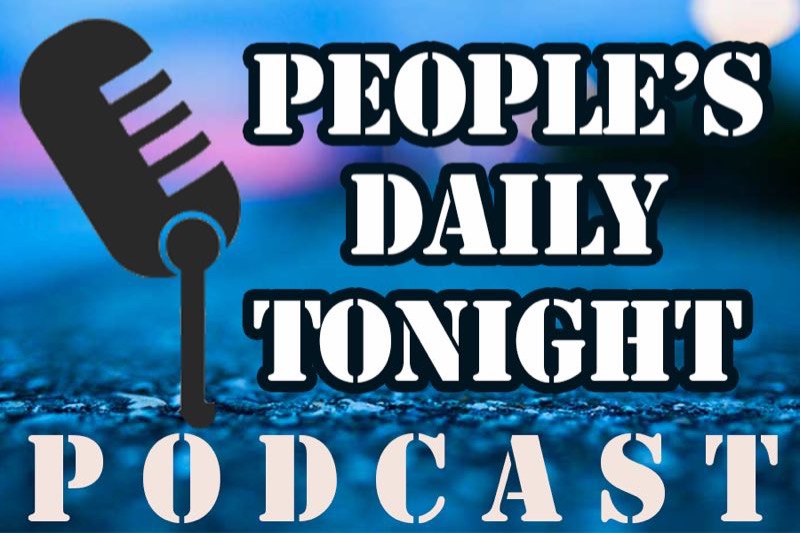 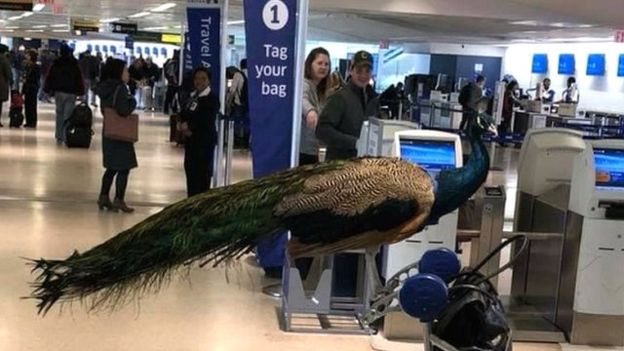 An emotional support peacock was turned away from Newark airport. (Photo: Reuters)

Airlines get tough after surge in requests for 'support pets'

If you were planning to bring a hedgehog on to a flight as a form of emotional support, you might have to think again.

Hedgehogs have been included on a banned list - as airlines get tougher over soaring demands from anxious passengers wanting to travel with "emotional support animals".

The airline recently had to turn down a request to travel with a peacock.

United said that last year there had been an increase of more than 30,000 passengers wanting to travel with emotional support pets.

From next month, there will be tougher rules on animals carried by passengers to provide reassurance or as part of therapy - although this will not affect animals such as guide dogs for the blind.

As well as 48 hours' notice and a letter from a mental health professional, passengers will now have to show proof that their animal has been "trained to behave properly in a public setting".

From next month, Delta will also be stepping up efforts to "protect" its passengers, after an 84 percent increase in on-board animal "incidents".

A statement from the airline says this is because of "serious safety risks involving untrained animals in flight".

But Delta has faced requests to carry "comfort turkeys", possums and snakes. And it says staff have faced biting, growling and barking animals, as well as urination and defecation. (BBC)

A girl who sold her braids to raise money for a smartphone so her family could stay in touch with her working mother has warmed hearts in China.

He Jingjing, 12, lives in a poor and remote village with her grandmother in Shaanxi Province.

"I had a thick braid that went down to my butt," said He, who spoke with pride about parting with her 1-meter-long locks for $45 in January.

"That's the most I've earned for my family," Said He.

By selling her hair and helping her grandmother raise chickens, she hopes to see her mother through video chat.

Despite her hardships, she is optimistic as she awaits her mother's brief return home for the Spring Festival. (Global Times)

A man who used his hand at fishing out his phone from a toilet had to be freed by firefighters after his arm got stuck.

The man surnamed Tan had been drinking with friends at a hotel in Guangxi  when using the bathroom his new iPhone 8 plunked into a squat toilet.

Desperate to recover the pricey device, Tan plunged his right arm down the hole to feel around for it.

Instead, Tan reached too far and became stuck. He remained on the floor for 30 minutes until he was discovered by a janitor.

Firefighters  arrived to dismantle the toilet.  Tan suffered minor injuries from the incident. The phone's fate was not reported. (Global Times)

A woman has described the moment she arrived home late at night to find the neighbour's dog riding her pony.

Callie Schenker said she noticed the corgi sitting on top of her horse, Cricket, as she pulled into her driveway in Missouri.

In video footage she recorded, she approaches Cricket and makes a noise to call him over, only prompting the small horse to run off with the dog balanced on his back.

The dog, who belongs to her neighbours, apparently roams the local area.

The video proved highly popular on Facebook, where it had been viewed more than 5.7 million times. (The Independent)

People in Bolivia are scouring the country to find a mate for a childless frog who they fear may be the last of his species.

Romeo, a 10-year-old Sehuencas water frog, has been calling in vain for a mate for the past nine years.

A dating website donated to the search, and even gave him a profile that says he is "looking for my Juliet".

Scientists are searching for a female with whom a breeding program can be started.

But it has to be quick, as Sehuencas water frogs don't often live beyond 15. (BBC) 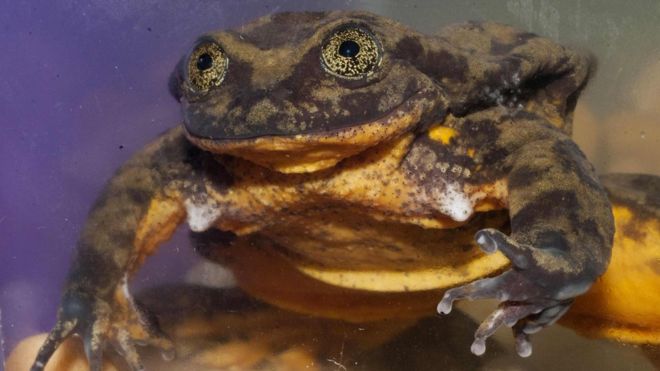