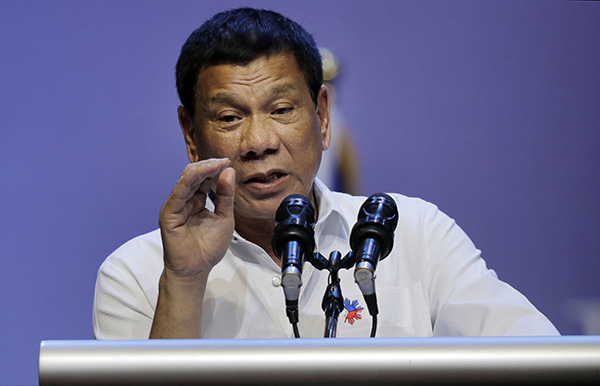 MANILA, March 14 - Philippine President Rodrigo Duterte will issue a notice of withdrawal from the International Criminal Court (ICC), his spokesman said on Wednesday.

"I confirm that President Duterte has directed the executive secretary to give notice that (the Philippines is) withdrawing as a state party to the Rome Statute of the ICC," Harry Roque said.

The Rome Statute is the treaty which created the ICC.

Roque's statement came a few minutes after Duterte's office issued a draft statement that the Philippines will withdraw from the ICC "effective immediately."

In a written statement issued by his chief legal counsel Salvador Panelo, Duterte said, "I therefore declare and forthwith give notice, as the President of the Republic of the Philippines, that the Philippines is withdrawing its ratification of the Rome Statute effective immediately."

The announcement came barely five weeks after Roque announced that the ICC is moving to conduct a "preliminary examination" on Duterte's anti-drug campaign.

Roque told a news conference on Feb. 8 that the Philippine mission in The Hague was informed by the ICC's prosecutor office that the court was "opening a preliminary investigation on the alleged acts associated with the campaign against illegal drugs covering the period of July 2016."

Duterte is unfazed by the ICC probe, stressing that his administration will continue its war on drugs.