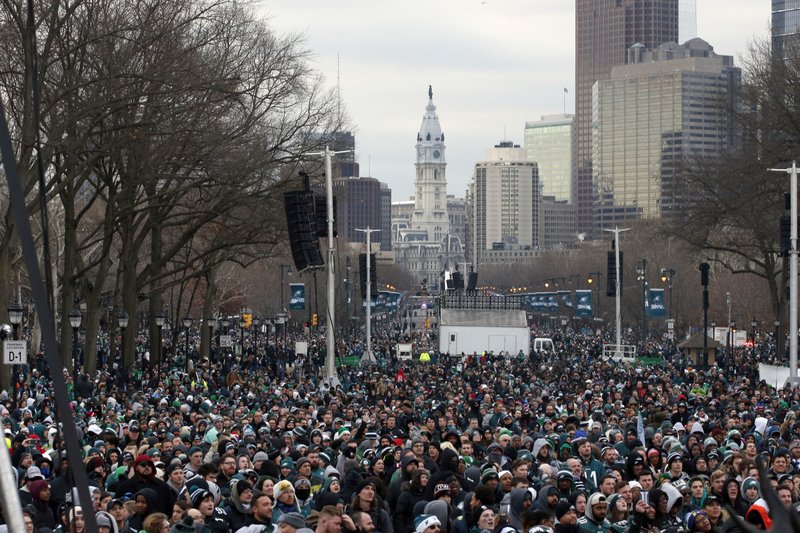 Fans clad in Eagles green lined up 20 deep in spots to catch a glimpse of the champs, who rode up Broad Street in open-top, double decker buses. Bundled up against freezing winds, some fans from New Jersey walked across the nearly 2-mile long Benjamin Franklin Bridge just to get into the city.

“We were wondering if we would ever see the Eagles win a Super Bowl in our lifetimes, and we may not ever see another one,” said John Thompson, 56, of suburban Downingtown. “That’s why we’re here today.”

The players got into the Philly spirit. Center Jason Kelce walked the route in an outlandishly sequined Mummers getup — a nod to Philadelphia’s raucous annual parade on New Year’s Day — slapping fans’ hands and leading them in a profane chant broadcast on live TV. Defensive end Chris Long wore a full-length, fake fur coat atop an Allen Iverson 76ers jersey.

The parade caps a glorious week for jubilant fans celebrating an NFL title that had eluded them for nearly 60 years. Led by the backup quarterback Foles and second-year coach Pederson, the Eagles beat the New England Patriots 41-33 on Sunday night.

Schools, museums, courts, government offices and even the Philadelphia Zoo were shut down so the city could fete an underdog Eagles team that few outside Philadelphia thought had a prayer of beating the mighty Patriots led by superstar quarterback Tom Brady and coach Bill Belichick.

Thompson’s friend, Craig Moyer, also of Downingtown, said he came to the parade to honor his late mother, a life-long Eagles fan.

“My mother was from the coal regions, she passed at 91 years old,” the 66-year-old said. “She was an Eagles fan who used to tell me about the old championship games. So this is for her. We’re down here for her.”

Organizers prepared for as many as 2 million people to jam the parade route. No official estimate was released for the parade after the Phillies won the World Series in 2008, but experts have said that crowd likely didn’t exceed 750,000.