The People’s Liberation Army has updated its dietary and nutrition guidelines for the force’s two million troops and officers. 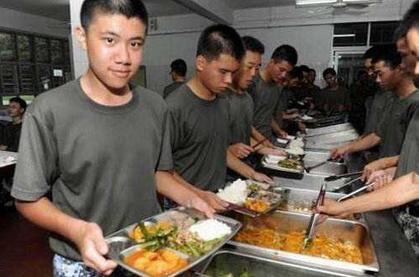 The guidelines, updated last year by the Logistics Support Department of the Central Military Commission and the army’s commissariats, outline a four-tier standard for troops, categorized by types of service and areas stationed at.

The top-grade category is for PLA aviators and crew serving on submarines. The second is for marines on vessels and troops deployed on elevated plateaus in Tibet and Qinghai, both of which shows a feature of calorie and protein-abundant dishes including boiled eggs, condensed milk, beef, chicken thighs and other lean meat, as well as glutinous rice. Other troops in more conventional services also have a wide choice of dishes.

The PLA Daily, the official newspaper of PLA, reported that a typical lunch for a garrison in southern China is usually served in semi-buffet style with a choice of no fewer than six dishes, typically steamed fish, stewed chicken with potatoes, shredded potatoes with sour-chili sauce, Sichuan chili tofu, asparagus lettuce with sliced pork, stir-fried vegetables and the soup of the day.

Lavish banquets are organized for all frontline soldiers prior to major festivals.

The recommended daily dietary intake for a PLA soldier is no less than 500g of grain, 1,000g of vegetables, 400g of meat and 200g of milk, which is much higher than the standard for an adult Chinese civilian.

In recent years, the PLA has banned the consumption of alcohol from its menus over concerns that it damages the force’s capabilities. On the other hand, the PLA has introduced a range of other refreshing beverages, including coffee and Red Bull.