HEADLINE Plenty of excitement on Day 3 of Winter Olympics

Plenty of excitement on Day 3 of Winter Olympics 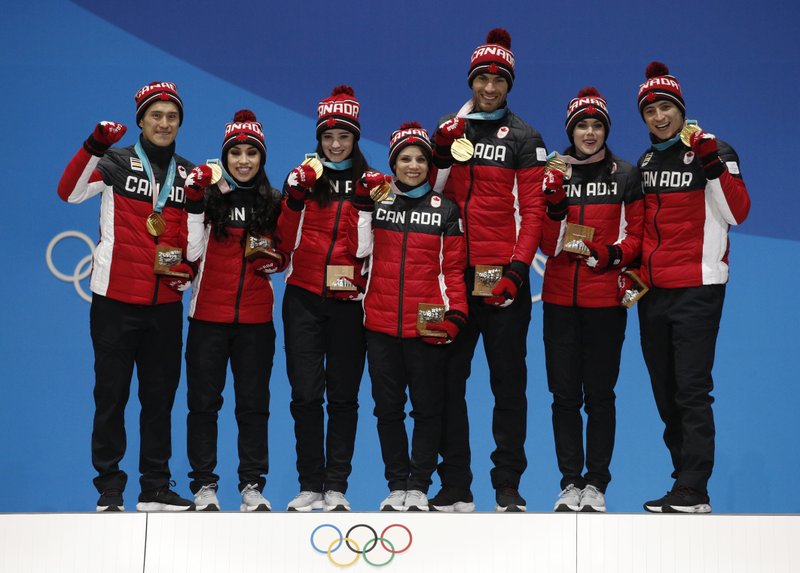 Strong winds forced the cancellation of the highly anticipated women’s giant slalom, but there was still plenty of excitement on Day 3 of the Pyeongchang Olympics.

Canada won the team gold in figure skating, and Mirai Nagasu became the first American woman to land a triple axel at the Olympics.

Jamie Anderson defended her title in Olympic women’s slopestyle snowboarding, surviving blustery and treacherous conditions to give the United States its second gold medal of the games.

German biathlete Laura Dahlmeier became the first double gold medalist of the Olympics by capturing the women’s 10-kilometer pursuit, and Frenchman Martin Fourcade bounced back from a disappointing eighth-place finish in the sprint race to win the gold medal in the 12.5-kilometer pursuit.

Dutch speed skater Ireen Wust won her fifth Olympic gold medal, victorious in the 1,500 meters, and Canada’s Mikael Kingsbury continued Canada’s domination of the men’s moguls with his first Olympic title and Canada’s third in a row in the discipline.

Lundby, who has dominated the World Cup circuit winning seven out of 10 events this season, nailed a jump of 110 meters for 264.6 points to capture Norway’s second gold medal of the games.

The temperature was minus-11 Celsius (12 Fahrenheit) at the start of competition at the Alpensia Ski Jumping Center.

Athletes bundled up with blankets while waiting on the steps to take their jumps.

The biggest measure of improvement for the historic combined Korean women’s hockey team comes in the form of taking more shots.

Their enthusiastic fans hoping for an improbable win in this team’s Olympic debut may have to settle for the Koreans scoring a goal.

Pernilla Winberg scored two goals and six others had a goal apiece as Sweden tuned out the roaring crowd and routed Korea 8-0.

The Koreans more than doubled their shots from their Olympic debut when they managed only eight in an 8-0 loss to Switzerland. They had that many in the second period alone.

The North Korean cheerleaders led fans in songs, chants and the wave. The flag-waving fans only got louder with each shot, though Swedish goalie Sara Grahn turned each shot away for the win.

Marrit Leenstra picked up bronze Monday, taking another medal for the Dutch.

Wust was the first of the favorites to race and her time stood up. She finished in 1 minute, 54.35 seconds to hold off the Japanese by 0.20 seconds. It was sweet revenge for the Dutch veteran after she lost the 3,000-meter race on Saturday by 0.08.

She leaped into the air and straight into the arms of her coach as Takagi crossed the line in the final pairing.

After three events, the Dutch have six of nine medals.