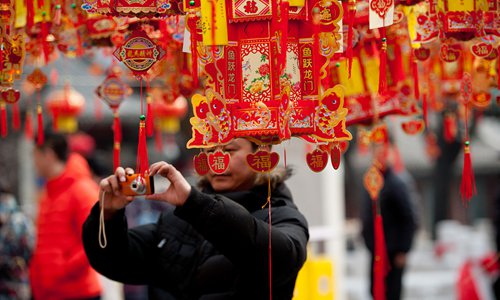 The fifth day of the traditional Chinese lunar year can be summed up in one word: poverty. The idea originates with an article written by the Tang Dynasty (618-907) author Han Yu (768-824).In an article headlined "Dispelling poverty," Han identified five poverty demons: poverty of intelligence, of knowledge, of literature, of fate and friends. Chinese have worked out many ways to break the five, or po wu in Chinese.During the first four days of the new Chinese year, cooking, cleaning and crying are regarded as ominous, best-avoided taboo activities. That changes on the fifth day, however. The "don'ts" don't work anymore. That is another reason why Chinese name the fifth day po wu: breaking the five taboos on the fifth day.DumplingsDifferent regions have different ways of celebrating the fifth day. One common custom is to eat dumplings, especially for those who live in North China. In the northern capital, Beijing, families usually make dumplings together at home. Chopping the meat, rolling the flour together should help family members enjoy their time together. The sound of chopping is said to scare of evil spirits away and bring good luck for the coming year.Dumplings in other regions have a different meaning. About four hours by high-speed train from Beijing in Tianjin, homemade dumplings have a quite different meaning. Before stuffing dumplings with meat and vegetables, traditional Tianjin residents will mix the chopped meat and vegetables together in a big bowl. This stuffing is regarded as a villain who has been chopped and beaten hundreds of times and now will be sealed safe inside the dumplings. Making sure to seal them tight, the Tianjin denizen can lead a peaceful and lucky life in the new year.God of wealthCommonly this day is regarded as the birthday of one of China's most popular deities: the god of wealth. Especially in South China, people worship and welcome him inside their house in the hope of amassing more fortune in the new year. Inside they post a picture of a pair of gods of wealth. Each holds a gold ingot. Four characters "zhao cai jin bao" appear in the four corners of the poster. Broadly they translate as "Welcome money and treasures will come to all the family." Sheep heads and carp and are two essential offerings for the money man, as the sheep character yang relates to xiang, auspiciousness. The only difference between the characters is the radical "yan," or speech. As for carp, yu has the same pronunciation as yu, abundance. Historically Chinese have often known starvation and so they naturally wish for sufficient food and other necessities stuff at the beginning of each year. Sheep's heads and carp have thus come to symbolize wealth to Chinese.According to another old custom, people should open all their windows and doors at 12 o'clock midnight. In that first moment of the fifth day, an open window sincerely welcomes the god of wealth.FirecrackersTo thoroughly banish bad luck, many a Chinese likes to light firecrackers. Firecrackers are usually lit at night. As darkness falls, the noise erupts. The more the noise, the greater the good wishes for a happy new year.