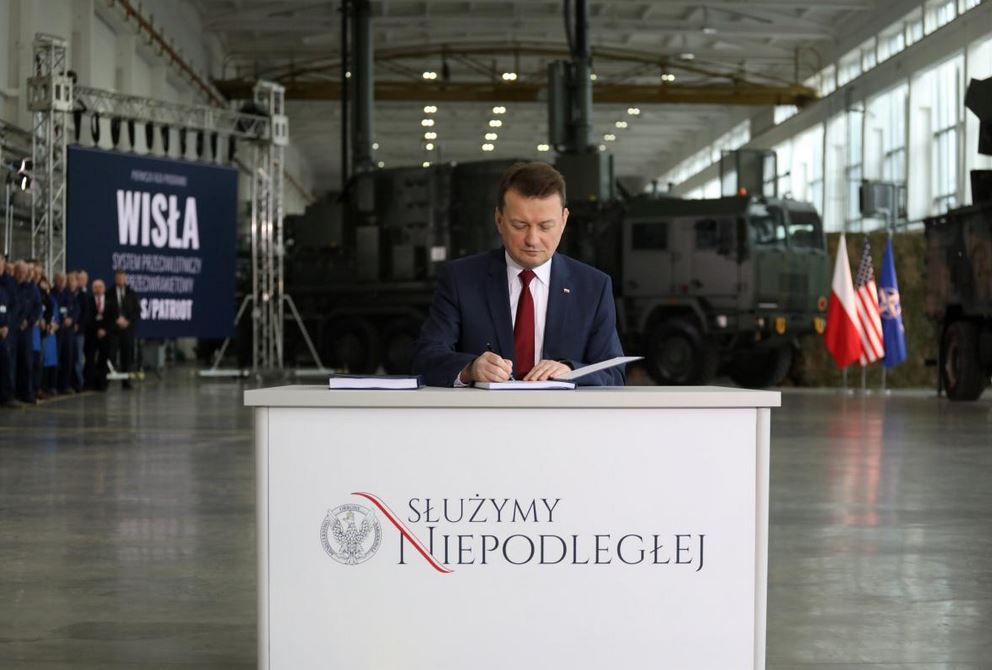 Poland signed the largest arms procurement deal in its history on Wednesday, agreeing with the United States to buy Raytheon Co’s (RTN.N) Patriot missile defense system for $4.75 billion in a major step to modernize its forces against a bolder Russia.

“It is an extraordinary, historic moment; it is Poland’s introduction into a whole new world of state-of-the-art technology, modern weaponry, and defensive means,” President Andrzej Duda said during the signing ceremony.

NATO member Poland has accelerated efforts to overhaul its ageing weaponry following Moscow’s annexation of Ukraine’s Crimea peninsula in 2014. Two-thirds of Poland’s weaponry dates from the Cold War era when it was in the Soviet-led Warsaw Pact.

Russian Deputy Foreign Minister Vladimir Titov told state-run Sputnik news website in November that Patriot deployments were part of a US plot to surround Russia with missile defense systems “under the pretext of mythical threats to security”.

The Patriot deal follows Monday’s expulsion of more than 100 Russian diplomats by the United States and a score of other Western countries including Poland in response to a the poisoning of a Russian former spy in Britain.

This month, Russian President Vladimir Putin unveiled an array of new nuclear weapons, saying they could hit almost any point in the world and evade a US-built missile shield.

The Patriot deal came as a relief for Poland amid tension with Washington over a law Warsaw introduced in January imposing jail terms for suggesting Poland was complicit in the Holocaust.

The United States says the bill subverts freedom of speech and Israeli officials say it amounts to Holocaust denial, an accusation that Poland’s nationalist government rejects.

Wednesday’s deal is for the delivery in 2022 of two Patriot batteries manufactured by Raytheon, each with two fire units.

Warsaw is negotiating with Washington to buy more Patriots, a new 360-degree radar and a low-cost interceptor missile as part of a second phase of modernization.

“We do expect that Poland will move pretty quickly with Phase II. They have a stated desire to complete that by the end of the year,” Wes Kremer, president of Raytheon Integrated Defense Systems, told Reuters by telephone.

NATO planners say Russia is using its Baltic enclave of Kaliningrad as well as Crimea to pursue the capability to block off NATO’s air access to the Baltic states, about a third of Poland and to the Black Sea.

Warsaw’s decision may raise pressure on Washington to meet Baltic requests for stronger air defenses. While the Baltics are seeking their own missile defenses, the high cost for their small economies makes any quick purchases difficult.

Raytheon’s Kremer said the current threat environment had increased demand for missile defense systems and the Donald Trump administration was working to accelerate sales to allies.

“In general, they’re more open to expediting and getting these deals worked,” Kremer said.

Fourteen other countries, including six NATO members, have the Patriot missile. Romania agreed in November to buy Patriots and the US government has also approved sales to Sweden. Switzerland last week announced it was also looking at the Patriot among other systems in a competition expected to kick off later this year.

Raytheon hopes the Polish purchase could provide fresh momentum for its bid to supply a more modern Patriot system to Germany, which has not yet signed a contract for the rival MEADS system built by Lockheed Martin (LMT.N) and European missile maker MBDA, three years after it picked MEADS over Patriot.

Kremer said changing course and expanding its existing Patriot systems would make it easier for Germany to work jointly with other Patriot users in NATO, although MEADS supporters say the system is intended to be able to integrate other components.

Poland’s deal, approved in November by the US State Department, envisaged a sale worth up to $10.5 billion. But Warsaw brought the price down by opting for a less ambitious command system and procuring some elements locally.

“We are getting to the front row of countries which will be able not only to cooperate and jointly carry out tasks with the United States and NATO, but will be also perceived on (NATO’s) eastern flank as ... stronger than others,” General Leszek Surawski, the Polish military’s chief of staff, said after the signing ceremony.