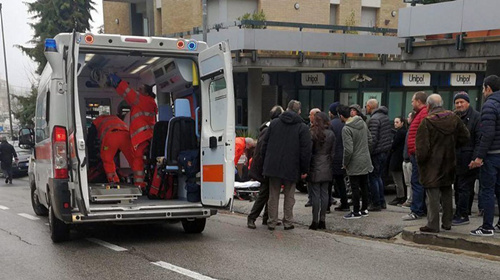 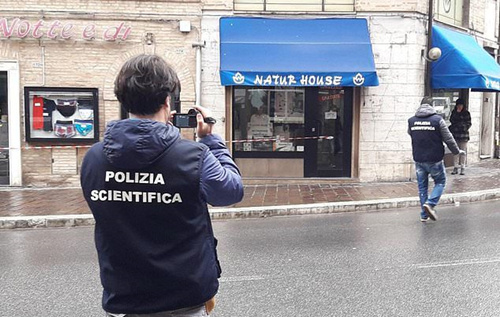 Italian Forensic policemen take pictures to the site of a shooting which broke out in Macerata, Italy, Saturday, February 3, 2018.

Police photos showed the shooting suspect with a neo-Nazi tattoo prominently on his forehead as he sat in custody and an Italian flag tied around his neck as he was arrested in the central Italian city of Macerata,. Authorities identified him as Luca Traini, a 28-year-old Italian with no previous record.

Traini had run for town council on the anti-migrant Northern League's list in a local election last year in Corridonia, the party confirmed, but its mayoral candidate lost the race. The news agency ANSA quoted friends of his as saying that Traini had previously been affiliated with Italian extremist parties like the neo-fascist Forza Nuova and CasaPound. 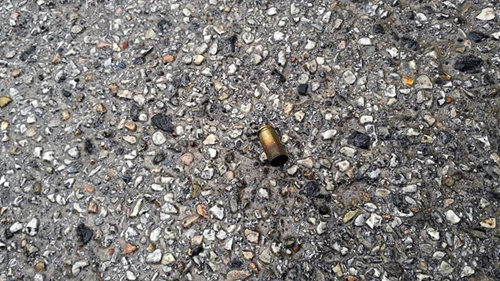 The spent cartridge case of a firearm is seen on a street after a shooting broke out in Macerata, Italy, Saturday, February 3, 2018.

The shooting spree came days after the slaying of 18-year-old Pamela Mastropietro and amid a heated electoral campaign in Italy where anti-foreigner sentiment has become a key theme. Italy has struggled with the arrival of hundreds of thousands of migrants in the last few years coming across the Mediterranean Sea in smugglers' boats.

After the attack, Premier Paolo Gentiloni warned in Rome that "the state will be particularly severe against whoever thinks of feeding the spiral of violence."

In Macerata, Interior Minister Marco Minniti said the gunman had been motivated "by racial hatred," and had "a background of right-wing extremism with clear references to fascism and Nazism."

"What happened appears to be a completely random armed retaliation raid," Minniti said, adding that evidence indicated that while the gunman had planned the attack, he had acted alone. "In a democracy, it is not permitted for individuals to seek justice alone, even if in this case, there is nothing that recalls a notion of justice."

Authorities said the six wounded — five men and one woman — appeared to be random targets in various parts of the city of 43,000 in Italy's central Marche region. Italian news reports indicated that the gunman's trajectory included the area where the Italian murder victim was found and where the prime suspect in her slaying lived.

The identities and nationalities of the shooting victims remained unknown. Hospital officials said late Saturday that one had been treated and released, while the others had either undergone surgery or were facing operations for their injuries. One of them remained in intensive care.

As the violent attack unfolded, police told residents to stay inside and ordered a halt to public transport to limit the casualties. Such violent shootings are rare in Italy, and usually associated with the southern Italian mafia. 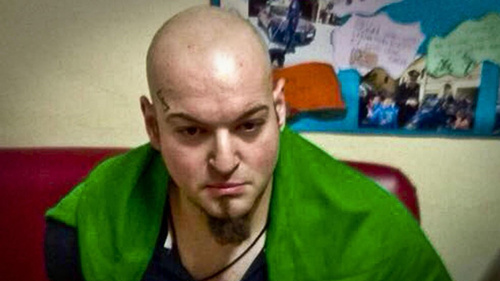 A man identified by Italian authorities as Luca Traini is accused of shooting several people in Macerata, Italy, on Feb. 3, 2018.

A video posted by the il Resto di Carlino newspaper showed the suspect with an Italian flag draped over his shoulders being arrested by armed Carabinieri officers in the city center, near where he apparently fled his car on foot. Italian news reports said a registered gun was found inside the car and the suspect did a fascist salute as he was arrested, but no salute was visible in the video.

The tattoo on Traini's forehead was that of the Wolfangel, an ancient runic symbol that according to the Anti-Defamation League was appropriated by Nazi Germany and later adopted by neo-Nazis in Europe and the United States.

"They were all of color, this is obviously a grave fact. As was grave what happened to Pamela. The closeness of the two events makes you imagine there could be a connection," Carancini said.

Mastropietro's dismembered remains were found Wednesday in two suitcases two days after she walked away from a drug rehab community. A judge on Saturday confirmed the arrest of the main suspect, identified as 29-year-old Innocent Oseghale.

Italy is heading into a general election on March 4 and the head of the rebranded League party, Matteo Salvini, had capitalized on the teen's killing in campaign appearances even before the shooting Saturday.

Salvini is pledging to deport 150,000 migrants in his first year in office if his party wins control of parliament and he is named premier. That has drawn sharp rebukes that Salvini is using the migrant crisis to foment xenophobia for political gain.

Salvini's League, which dropped "northern" from its name in a bid for a national following, has joined a center-right coalition with Silvio Berlusconi's Forza Italia and Giorgia Meloni's much smaller Brothers of Italy. They are running against Matteo Renzi's much-splintered center-left Democratic Party and the populist 5-Star Movement.

Salvini told reporters Saturday at a campaign stop in Bologna that he would bring security to Italy.

"Whoever shoots is a delinquent, no matter the skin color. It is clear that out-of-control immigration ... brings social conflict," he said.

"Whoever, like Salvini, exploits news events and tragedies for electoral purposes is among those responsible for the spiral of hatred and violence that we must stop as soon as possible," Grasso said.