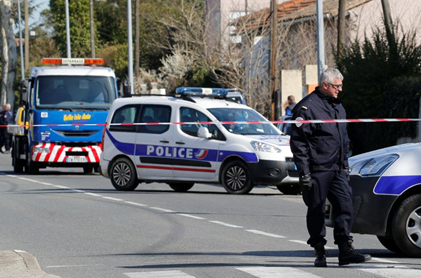 Paris (People's Daily) – A gunman killed three people and injured 16 on Friday in a series of attacks in the Carcassonne and Trèbes regions of southwestern France. French President Emmanuel Macron indicated he considered the episode a terrorist attack.

The gunman was shot dead approximately four hours after the violence began. "This attack has been claimed by ISIS, and it is currently being analyzed," the president said.

A search is currently underway in the neighborhood of Carcassonne for one of the shooter’s relatives.

The Interior Ministry identified the gunman as Redouane Lakdim, 26, of Moroccan origin. He is listed by the French authorities for his radicalization, and was known for minor crimes, including drug offenses, said Gérard Collomb, the Interior Minister.

The violence began when Lakdim stole a car in Carcassonne, wounding one person in it and killing another. He then fired at four officers of the National Police while jogging, injuring one, trying to run them over.

Lakdim then proceeded to a supermarket in Trèbes, a town 5 km away from Carcassonne, where he opened fire killing two more people and taking others hostage.

During the ordeal, Lakdim requested the release of Salah Abdeslam, the lone survivor of the organized terrorist attack in Paris on November 13, 2015, before being killed by SWAT teams.

Arnaud Beltrame, a National Police lieutenant colonel, shot Lakdim after volunteering to trade places with one of the hostages, Collomb said. Beltrame remains in critical condition from injuries he suffered during the ordeal.

French President Macron saluted Beltrame’s courage. "Our country has suffered an Islamist terrorist attack. Investigations should be made to answer a number of important questions: when did he become radicalized? How did he get his weapon?” exclaimed Macron, late afternoon.

“We have paid by blood for several years,” Macron added. “Our soldiers are risking their lives to identify threats and neutralize them… I want to express to the whole country my absolute determination to carry out this fight. I invite everyone to be aware of this situation’s gravity and to be aware of the strength of France.”

The Eiffel Tower lights will be turned off at midnight, announced the mayor of Paris Anne Hidalgo on Twitter, in honor of the victims of today’s attack.