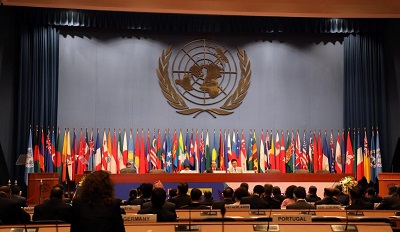 The 74th session of the United Nations Economic and Social Commission for Asia and the Pacific kicks off in Bangkok, Thailand on May 14, 2018. (Photos: Zhao Yipu/People's Daily)

Bangkok (People’s Daily) – The United Nations Economic and Social Commission for Asia and the Pacific (ESCAP) opened its 74th session in Bangkok, Thailand on Monday, with a strong call for strengthening multilateralism and regional integration to tackle rising inequalities in the region.

"With the gap between rich and poor widening, the erosion of potential productivity and growing threats from climate change - our region is grappling with considerable challenges," she said.

However, against this backdrop, she noted that the ESCAP was optimistic about the future. “Collectively we have an opportunity to shape policies to reduce inequality, exploit frontier technologies and strengthen multilateralism for the benefit of all citizens across Asia and the Pacific. That is an opportunity, which together, we should seize.”

In his video message to the session, UN Secretary-General Mr. António Guterres said, “The Asia-Pacific region is an engine of global growth, trade and investment and the creation of jobs all over the world but profound transformation underway driven by technological innovation and the challenge is to ensure that this transformation is for the better. The 2030 Agenda for Sustainable Development is our blueprint for success and the Asia-Pacific region can lead from the front.” 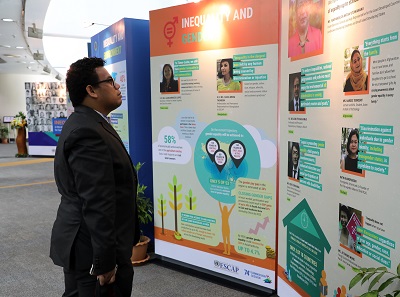 A man reads displays outside the conference hall.

The theme of the 74th session of the ESCAP is  "Inequality in the era of the 2030 Agenda for Sustainable Development." The CS74 theme study launched by the commission on Monday assesses the region’s inequality trends and policy gaps across the three types of inequalities: outcome, opportunity and impact.

It finds that inequality of opportunity is persisting despite average progress in accessing basic services. The report shows that had income inequality not increased in 10 countries in the region over the past decade, the Asia-Pacific region could have lifted close to 153 million people out of poverty. It also reveals which groups are left behind, or are disproportionately impacted by external shocks, such as natural disasters, and estimates how new technologies might further impact inequality trends in the region.

In his address at the ministerial opening, Thai Foreign Minister Don Pramudwinai called for leaders and policymakers to accelerate the pace of the Sustainable Development Goals (SDGs).

"We need transformative change in our way of thinking, doing and living," he said. "It cannot be business as usual. Thailand stands ready to engage and work constructively with ESCAP and all the Member States to address the region’s development challenges and inequality."

The president of the 72nd session of the UN General Assembly, Miroslav Lajčák, noted that tackling inequality is part of the fabric of the SDGs.

"Not only does inequality have a whole goal dedicated to it, but is also a driving force behind the entire 2030 Agenda," he said. "ESCAP has adopted a regional roadmap which supports Asia-Pacific countries in implementing the 2030 Agenda, bringing together various priorities from climate change to connectivity and offering a platform for sharing lessons learned and mobilizing support. This is multilateralism in action and it is something we need to see more of.” 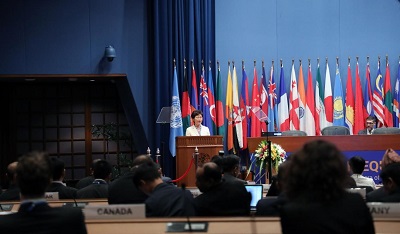 In her address, Chief Executive of Hong Kong Special Administrative Region Carrie Lam echoed the importance of multilateralism, particularly a free trading system. "We have benefited immensely from free trade which is instrumental in developing Hong Kong into an international trade and business centre as it is today, and we hold the belief that a strong and rule-based multilateral trading system is a cornerstone of the global economy," she said.

Marshall Islands President Hilda C. Heine, who was elected as Chair of the 74th session, added that the theme of inequality is a powerful reminder of the importance of equality as an imperative to achieving the 2030 Agenda.

"As small island developing states we rely on our closest development partners, including ESCAP to support our efforts to translate the ambitious 2030 Agenda including its comprehensive range of SDG goals, targets and indicators into tangible outcomes and actions, recognizing our unique challenges and vulnerabilities,” she said.

In his statement, Kiribati President Taneti Maamau said, “The path to achieving the 2030 Agenda is long and complex, but one that we all have a duty to give to, through our efforts and commitments both individually and collectively so that together as a family we can translate the 2030 Agenda into action, supported by partnerships and innovative policy solutions that will ‘leave no one behind.’”

More than 540 participants from 44 member states and associate members attended the meeting.