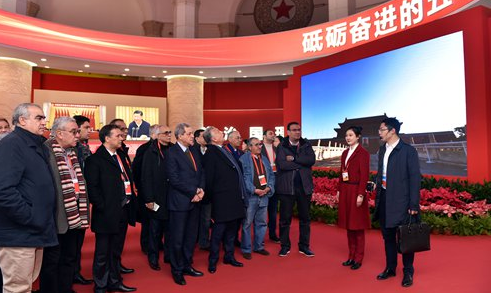 Representatives of foreign political parties visit an exhibition about China's development over the past five years during the CPC in Dialogue with World Political Parties High-Level Meeting, in Beijing,

"I had never heard of such a huge platform for exchanges between political parties before!" Such was the reaction the Global Times reporter heard from almost every interviewee at the Communist Party of China (CPC) in Dialogue with World Political Parties High-Level Meeting.Representatives of nearly 300 parties from 120 countries, from both the West and underdeveloped regions, participated in the three-day meeting on December 1-3 in Beijing.It was an opportunity to learn all about China's realities, from the anti-corruption to shared bikes, from the latest technological progress to the "three rural issues" (agriculture, village and peasant).During the meeting, the "Beijing Initiative" was passed, which stresses the need for political parties from around the world to improve trust, increase communication, work together closely and search for common ground while accepting each other's differences.Parties also stressed the need for mutual respect and learning in a new model of party-to-party relations, coming together to create the strength of a community of shared destiny. 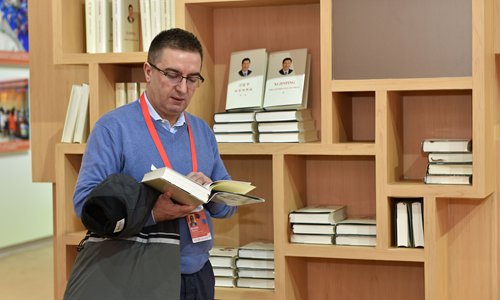 A book in demandBeijing has entered winter, and the pond in the Diaoyutai State Guesthouse has already frozen over. However, the weather didn't decrease enthusiasm at the meeting."Can I have three more of the Spanish edition?" "Do you have them in Swahili?" "Sorry, could you pass me an English copy, and a French one please?" This was the scene at the counter distributing the book Xi Jinping: The Governance of China, as representatives clamored for copies.An African representative couldn't conceal his joy, telling the Global Times that "I'm taking them back for my co-workers and friends. But I'm worried the books will make me exceed my luggage allowance."An Egyptian representative told the Global Times that, "your country has the world's fastest trains, the biggest high-speed rail network and the most advanced sharing economy and online payment methods. China shouldn't think of itself as backward anymore, you are already the model for other countries' development."Many participating political parties at the event came from developing countries, such as the Democratic Party of Thailand and Kazakhstan's Nur Otan, and there were also representatives from Western countries' major parties, such as the Democrats and Republicans of the US and the UK's Conservative Party. And of course there were Communist parties from Vietnam and Cuba.The Secretary General of Djibouti's "People's Rally for Progress" and Minister of Economy and Finance in-charge of Industry, Ilyas Moussa Dawaleh, told the Global Times that, "the CPC governs the most populous nation in the world. The challenges it faces are what many developing countries will face in their quest for modernization and industrialization. The CPC's experience is very valuable to us."Developed countries also wish to learn from the CPC. Song Luzheng, a research fellow at the China Institute of Fudan University, told the Global Times that Western countries are intrigued by how the CPC can effectively prevent or minimize the influence from populism and the permeation from capital."In recent years, the politics of Western countries have become increasingly populist, divisive and alienating. Currently, the CPC can create long-term plans and successfully carry them out, and is actively taking more responsibility on the world stage and participating in the resolution of problems of global governance. They want to know how China has managed to do this," Song added.The Director of the Asia Research Center of Denmark's Copenhagen Business School, Professor Kjeld Brodsgaard, said that many countries' biggest trading partner is now China. Therefore studying China and the CPC is not just for developing countries. 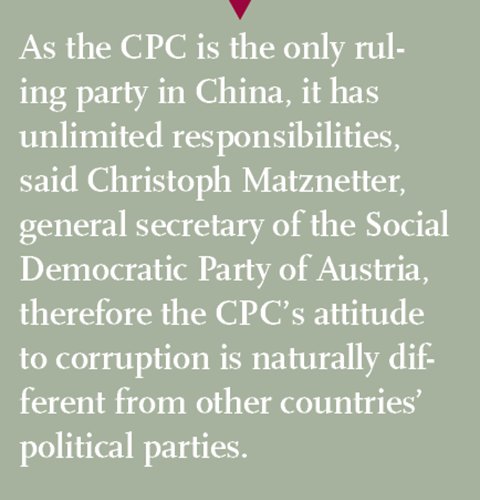 Young, hardworking and efficientAt the meeting, what really caught reporters' interest were the speeches and discussions on punishing and preventing corruption between the guests from China, Vietnam, Austria, Uzbekistan and Peru.Guo Yong, the director of the Center for Anti-corruption and Governance of Tsinghua University, said in his speech that economic transition will open space for corruption. "Therefore, every country that is striving for industrialization, urbanization and modernization cannot totally avoid this challenge."During the Q&A session, a young Colombian guest offered his hard-hitting point of view. "In Latin America, as well as other developing regions, dealing with corruption is very hard. Because politicians have no motivation to change the corrupt political system which provides space for their corruption, and this makes youth lose hope in politics."As the CPC is the only ruling party in China, it has unlimited responsibilities, Christoph Matznetter, general secretary of the Social Democratic Party of Austria, told the Global Times. For the safety of the nation and to ensure its ruling party's position, the CPC's attitude to corruption is naturally different from other countries' political parties, he said.Denmark's Brodsgaard considered that Chinese officials are one of the secrets to China's success, constantly bringing "new blood" into the political arena while replacing "the old and corrupt blood.""When I first came to China in 1978, lots of officials were quite old and some of them even used wheel chairs. However, since the Deng Xiaoping's era, this has gradually changed. We can see more vigor in the new leadership, with more well-educated and younger officials appearing in China's political field," Brodsgaard said.He praised China's leading cadres as "young, hardworking and efficient," saying that "they inspire interest and hope in politics among China's youth."Song said that culture is a crucial factor. In Chinese culture, parents for their children and schools for their students will develop an "unlimited sense of responsibility."Therefore, politicians of the CPC even more so shoulder the responsibility of an entire nation. He added that corruption is not linked to any particular political system but rather to economic transitions and poverty.No import or export of system"The CPC will neither 'import' foreign models of development nor 'export' the Chinese model and ask other countries to 'copy' the Chinese practice," Xi Jinping, general secretary of the CPC Central Committee, said in his keynote speech on December 1 at the opening of the meeting.His remarks were met with much support from representatives of developing countries, who said that, in comparison with some Western countries, China has done very well in this regard."Many Western countries like to say this and that when working with developing countries, using rhetoric like democracy and human rights to rudely preach at us, and this often greatly obstructs cooperation," Hossam El-khouly, vice president of Egypt's Alwafd Party, told the Global Times."But if you ask them about their own human rights, then suddenly they don't want to discuss anything," he added."Some countries have even used such pretexts to invade countries, which was a disaster for the people of those countries and a discredit of the West. This is one of the reasons why China is seen more positively in Africa and elsewhere," El-khouly said.Djibouti's Dawaleh told the Global Times that the governments and media of many Western countries "cannot deal with" China's success in Africa, so they like to create rumors, criticize its political systems or call China "neocolonialist."In comparison, the West's preaching of "Western democracy and human rights is a lot less inviting," Dawaleh said."Some people may temporarily fall for their slander, but when China's investment and infrastructure projects gather pace and bring benefits to the local people, these negative reports will collapse in the face of facts," he said.Representatives and overseas media outlets praised the CPC's openness and self-confidence and also thanked China for creating a platform for exchanges between parties.An anonymous foreign reporter said that he had been involved in reporting on politics for years, yet he "didn't know the world had this many political parties, and the fact that the CPC can maintain contact with them and invite them over is very impressive."That same reporter also expressed that many parties in the past could never have enjoyed such a multilateral platform for extensive and profound exchanges, and that the parties of developing countries in the past rarely had their voices heard.On December 3, the meeting concluded. Chinese State Councilor Yang Jiechi said the CPC will consolidate friendly cooperation with political parties worldwide.Referring to the keynote speech made by Xi at the opening ceremony Friday, Yang said it expressed the CPC's determination to work with political parties worldwide to promote global development, share global prosperity and guide the world's future, Xinhua News Agency reported.The Global Times reporter noticed that, in the closing ceremony, whether it be France and Canada or Algeria and Mongolia, representatives from all countries praised China for building such a universal platform for honest, uninterrupted dialogue.The UN and other international organizations are responsible for conducting global exchange between leaders of nations, but rarely are there any platforms for exchanges specifically between international political parties.Representatives of Sudan, Palestine and many Asian countries also expressed hope for China to continue hosting and even institutionalizing this meeting.