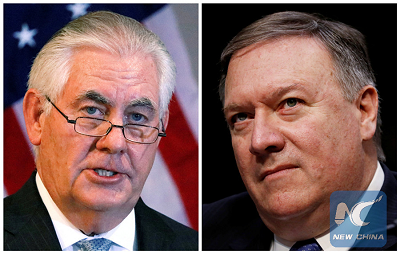 WASHINGTON, April 12 - Mike Pompeo, the pick of US President Donald Trump to replace outgoing Secretary of State Rex Tillerson, attempted to strike a cooperative tone to other nations in his confirmation hearing in the Senate on Thursday.

SOFTENING HAWKISH PROFILE ON IRAN, DPRKPompeo, widely termed as a "hawk" in the Trump administration, tried to soften his rhetoric on a group of regional hotspot issues in the hearing that lasted some four hours.Speaking of the possibility of US leaving the Iran deal that Trump has to decide around May 12, Pompeo said his objective was to "fix this deal.""If there's no chance that we can fix it, I will recommend the president to do our level best to work with our allies to achieve a better outcome and a better deal," he said.He further explained that should the framework agreement not come in place by May 12, he would work for a better agreement despite Tehran's threat to leave the deal if Washington drops out of it."There is continued interest on the part of Iran to stay in this deal. It's in their own economic self-interest to do so," he said.As for Pyongyang, Pompeo also tried to make a more peaceful tone by mentioning the proposed meeting between Trump and Kim Jong un, top leader of the Democratic People's Republic of Korea (DPRK)."There is work being done today in preparation for the president's proposed meeting with Kim Jong un," he said."No one is under any illusions that we will reach a comprehensive agreement through the president's meeting, but to enable, to set out the conditions which would be acceptable to each side for the two leaders that will ultimately make the decision about whether such an agreement can be achieved and then set in place," he added.REMAINING HARSH ON RUSSIAUS relations with Russia have further deteriorated recently due to the "poisoning attack" of an ex-Russian spy, the following expulsion of Russian diplomats and various sanctions imposed under different charges."I take a back seat to no one with my views of the threat that is presented to America from Russia," Pompeo said."If I am confirmed as the secretary of state, I can assure this administration will continue, as it has for the past 15 months, to take real actions to push back, to reset the deterrence relationship with respect to Russia," he said.The confrontational tone has stirred alarm for the relations between the two world powers."Pompeo will need to decide whether to resist - rather than encourage - one of the most alarming trends in U.S. global engagement: the ongoing militarization of US foreign policy. The tea leaves here are not encouraging," said Stewart M. Patrick from the Council on Foreign Relations, a US-based think tank.FOCUSING ON EMPOWERING STATE DEPARTMENTThe State Department went through pervasive doubts and disheartenment due to the bad blood and unimpressive communication between Tillerson and Trump.Pompeo said the State Department employees, in the past few weeks, expressed to him their hope to be empowered in their roles and have a clear understanding of the president's mission."That'll be my first priority," he said. "They've shared how demoralizing it is to have so many vacancies. And frankly, many of them said, not to feel relevant. I'll do my part to end those vacancies.""We don't yet have an ambassador to South Korea. We need one," he said. "With respect each of those positions, I am a talent hawk. I will find what I believe to be the best fit to execute America's diplomatic mission around the world."According to Samantha Power, former US permanent representative to the UN, attracting the right personnel will require Pompeo to work with the Congress and take other steps to change obsolete rules."For instance, discourage former State Department employees from returning, and require even experienced people to start at the bottom if they have not previously worked in government," she wrote in an article for the New York Times.