The Argentine navy raised the possibility on Thursday that a navy submarine missing in the South Atlantic suffered an explosion, heightening concerns over the fate of the 44 crew members on the eighth day of an international search effort.

A sound detected underwater by an international agency on the morning of Nov. 15, around the time the ARA San Juan sent its last signal and in the same area, was “consistent with an explosion,” navy spokesman Enrique Balbi told reporters.

The sub had only a seven-day supply of oxygen, a fact that drained hope from some of the relatives of the crew who have gathered at the vessel’s base in the city of Mar del Plata. 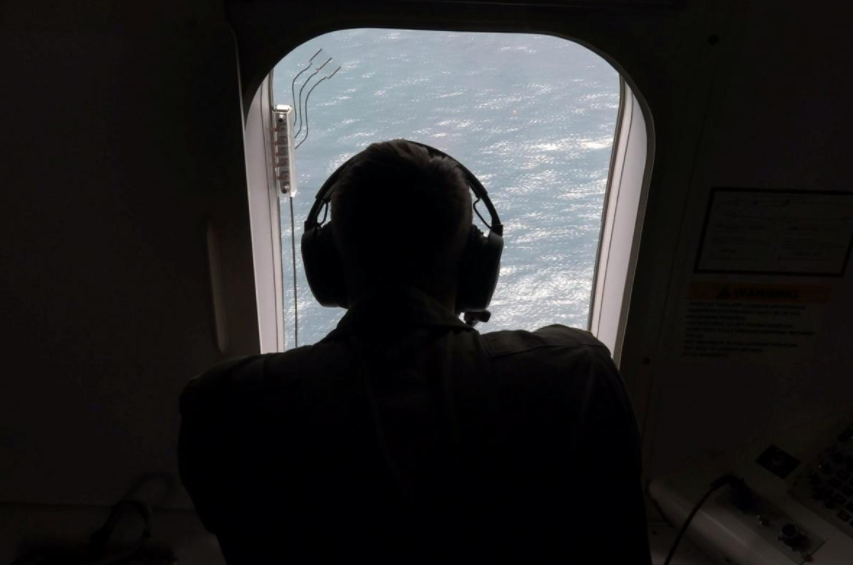 A member of the U.S. Navy, aboard the Boing P-8A Poseidon aircraft, looks down at the the South Atlantic Ocean during the search for the ARA San Juan submarine missing at sea, Argentina November 22, 2017. Picture taken November 22, 2017. REUTERS/Magali Cervantes

“What’s the point of hope if it’s already over?” Itati Leguizamon, wife of one of the missing crew members, told reporters.

The navy did not have enough information to say what the cause of the explosion could have been or whether the vessel might have been attacked, Balbi said.

Search-and-rescue crews were undeterred by a series of false leads that raised hope over recent days that the sub might be located. Asked during an evening news conference about the fate of the 44 sailors, Balbi said the situation was “critical”.

“We are not going to enter into conjecture out of respect for the families,” he added.

The information about the possible explosion was received on Thursday from the Comprehensive Nuclear Test-Ban Treaty Organization, or CTBTO, an international body that runs a global network of listening posts designed to check for secret atomic blasts.

The Vienna-based agency, which has monitoring stations equipped with devices including underwater microphones that scan the oceans for sound waves, said in a statement that two of its stations had detected an unusual signal near where the submarine went missing. The agency was more guarded about whether that was caused by an explosion. A member of the U.S. Navy stands next to the Boeing P-8A Poseidon plane before its departure to take part in the search for the ARA San Juan submarine missing at sea, at a military air base in Bahia Blanca, Argentina November 22, 2017. Picture taken November 22, 2017. REUTERS/Magali Cervantes
OPTIMISM FADES

A huge sea and air hunt is being conducted for the San Juan, a German-built, diesel-electric powered submarine that was launched in 1983, as crew members’ relatives waited anxiously for news more than a week after the vessel disappeared.

The relatives had been largely optimistic until Thursday. They shed tears and insulted authorities after being briefed on the news of the possible explosion. They were told about it before the public announcement.

Balbi said the news of the abnormal sound was consistent with a separate report received on Wednesday of an “acoustic anomaly” in the same area and around the same time. The San Juan was some 430 km (270 miles) off the Patagonian coast when it sent its last signal.

“This is very important because it allows us to correlate and confirm the acoustic anomaly from the U.S. report yesterday,” Balbi said. “Here, we’re talking about a singular, short, violent, non-nuclear event, consistent with an explosion.”

In Vienna, CTBTO hydroacoustic engineer Mario Zampolli said the signal his agency had detected “could be consistent with an explosion but there is no certainty about this.” Speaking to Reuters, he agreed with Balbi’s description of the signal as unusual and short, adding that the cause was non-natural.