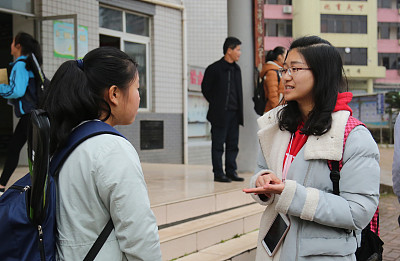 China's "post-90s generation" has taken the political stage as twentysomethings make their debut at provincial-level legislative meetings across the country this week.

The generation -- born after 1990 and raised in an affluent and rising China -- is stereotyped as lazy and selfish. But Shi Pengfei, 25, a deputy to the Henan Provincial People's Congress in central China, defies this generalization.

Shi, a 2014 human resources graduate of the University of Liverpool, returned to Dulouma Village in Weishi County and became a farmer.

"I was born in the village. I love my homeland," said Shi, who has rented more than 2,000 mu (133 hectares) of land to grow edible fungi. During the harvest, more than 1,000 villagers worked at his fungi cooperative.

As a first-time deputy, Shi feels a responsibility to express the voice of the villagers at the provincial people's congress, which started on Wednesday.

Shi is one of four post-90s deputies of the 935-member provincial legislature of Henan. The province is China's most populous, with a population of more than 100 million people.

Liu Yiming, 27, another deputy, is focused on the rights of left-behind women in the countryside and laid-off women in the cities.

"We trained 800 women in 2017, 500 of whom were impoverished and received free training," said Liu, who also volunteers to match poor people with job opportunities.

A trained maternity nurse can earn more than 8,000 yuan (1,250 U.S. dollars) in Beijing and Shanghai, said Liu, who called for better supervision of the household service industry.

"It's a prejudiced view that post-90s are lazy and selfish," said Liu. "It's time for us to fulfill our social responsibilities."

Liu's view was echoed by Jiang Mingqin, 28, a deputy to the provincial people's congress of Guangdong in south China.

Jiang is spearheading a project to invite the most popular users on Kugou's live-streaming platform to sing with left-behind rural children via the service in order to raise public awareness.

During the annual legislative meeting, she will propose a bill asking for more government support to left-behind children.

"In the past, I only cared about the interests of my company. Now I need to consider more people's interests and work for their welfare," said Jiang.

Yang Rubei is glad to see the involvement of post-90s young people in the legislature.

"They are full of vigor and vitality and inject 'new blood' into the legislature," said Yang.

"In the future, we will see more of them play their due roles in China's democracy process," he said.