Chinese Premier Li Keqiang said on October 31 that Russian Prime Minister Dmitry Medvedev's visit to China "has shown the closeness and high level of China-Russia ties," as Medvedev is the first foreign leader to visit China after the 19th National Congress of the Communist Party of China (CPC).

China is ready to consolidate trust, expand cooperation and exchanges with Russia, to bring cooperation visions into reality through the Prime Ministers' Regular Meeting as well as other cooperation mechanisms, Li said. 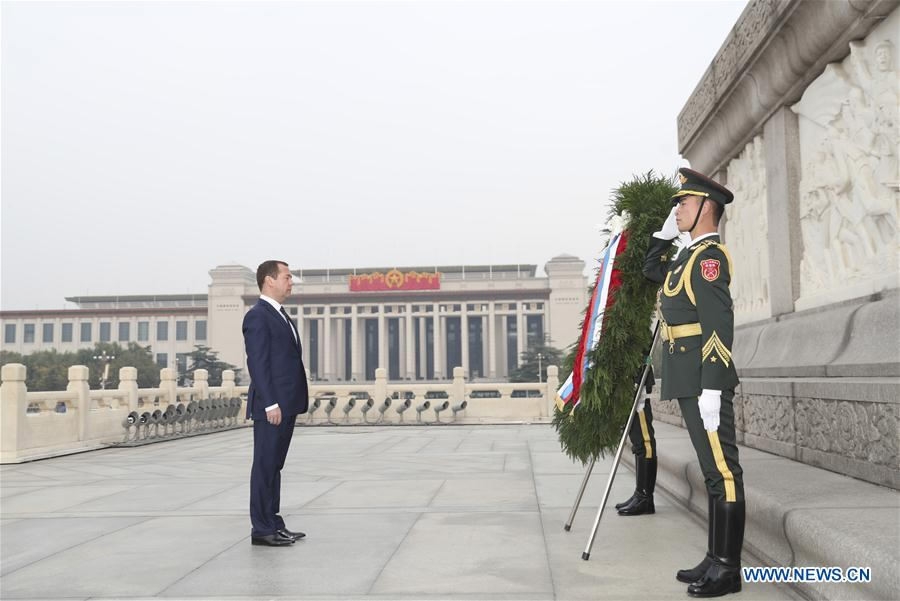 Russian Prime Minister Dmitry Medvedev lays a wreath at the Monument to the People's Heroes at the Tiananmen Square in Beijing, China, October 31, 2017. /Xinhua Photo

Under the new circumstances, China will further deepen reform and opening-up, nurture new driving forces, and share development opportunities with countries around the world, said the premier.

Medvedev congratulated China on the success of the congress. Hailing Russia-China comprehensive strategic partnership of coordination as "high-level" and "future-oriented", he said Russia expects joint efforts with China for greater progress of cooperation.

Medvedev is on an official visit to China from October 31 to November 2. Li and Medvedev will hold the 22nd China-Russia Prime Ministers' Regular Meeting on November 1, 2017.