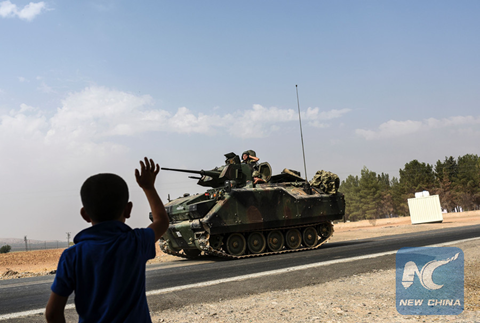 The White House said Sunday that a senior advisor of US President Donald Trump visited Turkey on Feb. 10-11. The visit came amid escalating tensions of the two NATO allies over Turkey's attack in Afrin, Syria.

During their meeting, Kalin and McMaster affirmed the bilateral strategic partnership, and discussed the "priorities and concerns" and common strategic challenges of both countries, said the White House.

It added that they addressed issues affecting bilateral relations in detail and explored ways to expand the joint fight against all forms of terrorism.

US Secretary of State Rex Tillerson will also visit Turkey next week in his Middle East trip, and US Secretary of Defense James Mattis is also due to meet his Turkish counterpart Nurettin Canikli in Brussels.

Relations between Washington and Ankara have been highly strained, in part due to US support for the the People's Protection Units (YPG) in Syria. Turkey sees the YPG as Syrian offshoot of the Kurdistan Workers' Party (PKK), which is designated as a terrorist group by Turkey, the United States and the EU.

With the YPG a key ally of Washington in the battle against the IS group, the Turkish campaign has seen the two NATO partners on opposite ends of the spectrum with a possible risk of direct conflict.

Two senior US generals have visited Manbij on Wednesday with outsized US flags on their vehicles, and one of them said "You hit us, we'll respond aggressively," in response to Turkish threats, according to US reports, clearly a sign of mounting tensions on the war terrain.