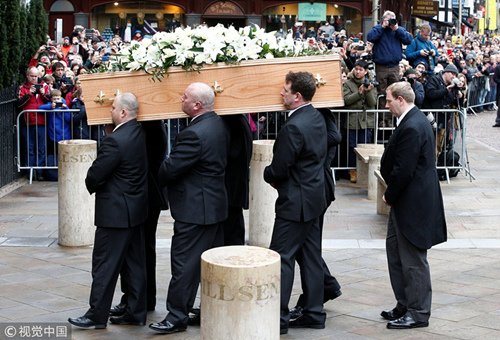 Friends, family, well-wishers fill the streets of Cambridge, UK, for the funeral of British physicist StephenHawking on March 31, 2018. (Photos: VCG)

CAMBRIDGE, March 31 - The funeral of Professor Stephen Hawking was held Saturday at a church near the Cambridge University college where he was a fellow for more than half a century.

Up to 500 family members, friends and colleagues attended the private funeral service at the Great St Mary's Church, officiated by the Reverend Dr Cally Hammond, Dean of Gonville and Caius College, where Hawking was a fellow for more than 50 years. 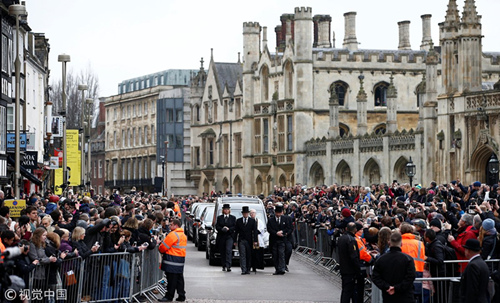 In a statement, Hawking's children, Lucy, Robert and Tim, said: "On behalf of our whole family we want to express our huge gratitude to all the wonderful tributes to our father and to those who have sent us messages of condolence."

Hawking's children said they had chosen to hold the funeral in Cambridge because Hawking lived and worked in Cambridge for more than half a century and was "an integral and highly recognizable part" of the city which "he loved so much and which loved him."

Thousands of citizens and visitors are estimated to have turned up outside the church to pay their respect, watching Hawking's coffin being carried by six porters into the church.

Partial road closures were implemented in Cambridge as the funeral cortege passes from the professor's home in the west of the city to King's Parade and the area around Great St Mary's Church. 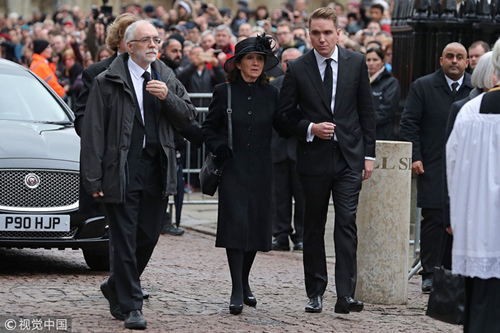 The funeral will be followed by a private reception at Trinity College, also close to the church.

More than three thousand people have visited Gonville & Caius College since Hawking's death to sign a book of condolence, which the college said will be eventually presented to Hawking's family.

In addition, an online version of the book also gathered thousands of messages from well-wishers all over the world.

The renowned British physicist died peacefully at home in Cambridge in the early hours on March 14 at the age of 76.

A legendary figure in the modern history of physics, Hawking is known for his work with black holes and relativity, and has authored several best-sellers on science, despite being bound to wheelchair after contracting a motor neurone disease in 1963 at the age of 21.

He broke new ground on the basic laws which govern the universe, including the revelation that black holes have a temperature and produce radiation, now known as Hawking radiation.

Hawking's ashes will be interred next to the remains of Isaac Newton and Charles Darwin at Westminster Abbey in London on June 15.