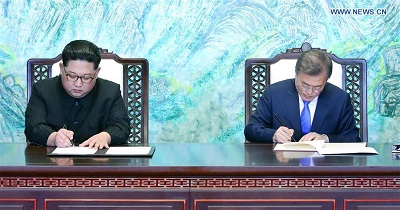 All the world saw the leaders of the two Koreas holding hands and symbolically stepping over the military demarcation line before their summit on Friday – yet, it was only a few months ago that the Korean Peninsula was buffeted by tensions.

The two signed the Panmunjom Declaration for Peace, Prosperity and Unification on the Korean Peninsula, which outlined the goals of denuclearization of the area and turning the current armistice agreement into a peace treaty.

“The meeting will be a milestone for improving north-south relations,” KCNA said.

China has welcomed the agreement, including a spokesperson for its Foreign Ministry who applauded the political resolve and courage of the North and South Korean leaders.

“Brotherhood will survive all vicissitudes, and a smile is all we need to dissolve old grudges,” the spokesperson explained with a Chinese poem.

North and South Korea demonstrated a special bond to the public, making the first-ever summit between the two leaders a success. Russia said it is ready to facilitate cooperation between the two Koreas. Furthermore, most of the key nations in the region stated their positive position towards the meeting.

In South Korea, the public is dealing with a more complex mood as great hope is being placed on the summit’s outcome.

An editorial from Korea Times also considered the meeting as a success in both tone and substance.

Despite the hopeful outcome, some South Koreans say that there is a long way to go until complete denuclearization can be achieved. They argue that whether North Korea will willingly give up its nuclear weapons remains uncertain. Some say the agreement offers no timeline and mentions no road map to achieve the goal. Korea JoongAng Daily said North Korea might be saving those specifics for when it has its upcoming summit with the US.

Comments from the west appeared mostly cautious about the summit. US President Donald Trump tweeted “Good things are happening, but only time will tell” while CNN stated that some longtime North Korean spectators doubt if the declaration will have any real effect on the country.

It is undeniable that positive changes are taking place on the Korean Peninsula. It took the effort of all parties for the bid to bring peace on the peninsula. North Korean leader Kim Jong-un said during the summit that he would close the country's nuclear test site in May, South Korean President Moon's spokesman told reporters. Experts say that denuclearization will become an important issue for the peninsula as well as all the relevant parties in the coming months as more substantive moves are needed to implement the declaration.

A US-North Korea meeting is expected  "over the next three or four weeks", according to US President Donald Trump who said the goal of the talks would be to "de-nuke" the Korean Peninsula and the situation was difficult to predict. "If he were to preside over the verifiable destruction of the North's nuclear and missile programs, formally end the 1950-53 Korean War and usher in the destruction of the world's last Cold War-era frontier, Trump would claim a feat that has eluded all of his most recent predecessors," CNN's Stephen Collinson commented. Intricate diplomacy still lies ahead.

Top image: ROK President Moon Jae-in (R) and Kim Jong Un, top leader of the DPRK sign for their joint declaration, titled the Panmunjom Declaration for Peace, Prosperity and Unification of the Korean Peninsula, at Peace House on the ROK side of Panmunjom, on April 27, 2018. (Photo: Xinhua)