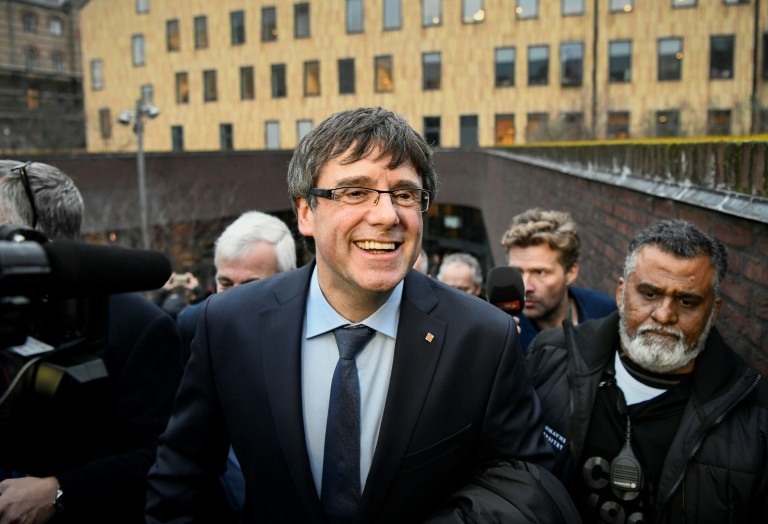 Ousted Catalan leader Carles Puigdemont on Monday vowed to form a new government despite "threats" from the central government in Madrid, as a Spanish judge refused to re-issue a European warrant for his arrest.

"We will not surrender to authoritarianism despite Madrid's threats," he said during a debate on Catalonia at the University of Copenhagen.

"Soon we will form a new government... it's time to end their oppression and find a political solution for Catalonia," the 55-year-old politician added.

Puigdemont's comments came hours after the speaker of the Catalan parliament proposed him as president of Catalonia following a snap election in December in which separatist parties once again won an absolute majority, in a major blow to the central government in Madrid.

The parliamentary vote to choose a new Catalan leader is now due to take place by the end of January.

Puigdemont wants to be sworn in from Belgium, where he went late October to avoid arrest after the Catalan parliament declared unilateral independence, sending shockwaves across an EU already shaken by Britain's vote to leave.

Madrid sacked Puigdemont and his entire government, and it dissolved the parliament following the declaration.

Charged with rebellion, sedition and misuse of public funds, Puigdemont now faces arrest if he returns to Spain over his role in the independence drive.

The government in Madrid has ruled out his being allowed to rule from outside the country and even his separatist allies -- the leftwing ERC party of Puigdemont's former deputy Oriol Junqueras -- are cool in private to his bid to rule from abroad.

Spanish prosecutors on Monday sought to have a European arrest warrant for Puigdemont re-issued as he arrived in Copenhagen, in his first trip outside of Belgium.

But Supreme Court Judge Pablo Llarena turned down the request, arguing Puigdemont had gone to Denmark "to provoke this arrest abroad" as part of a strategy to boost his arguments in favour of being allowed to be sworn in as president of Catalonia again.

Llarena had dropped a European arrest warrant for Puigdemont and four of his deputies who fled to Belgium in early December, saying it would complicate the overall probe into the region's leaders -- but warned they would be arrested if they return.

Puigdemont's visit to Denmark could help him avoid problems in Belgium, where European citizens can live without a residency permit for three months, after which they theoretically have to leave. If they return they can stay another three months.

Three other separatist lawmakers are already in custody in Spain over their role in Catalonia's separatist push, including Junqueras, his former deputy.

The Catalan parliament's legal experts have said that any presidential contender has to be physically present, but Puigdemont insists he has the legitimate mandate of the people to rule.

Spanish Prime Minister Mariano Rajoy reiterated Saturday that governing Catalonia from abroad would be "illegal" and has warned Madrid would maintain its direct control over the region and will take the matter to court if Puigdemont sought remote rule.

He has said he would contest in the courts any move to elect Puigdemont remotely.

Foreign Minister Alfonso Dastis said Monday in Brussels that "proposing a fugitive of justice" to head the Catalan government was not the "best start" for the new parliamentary term in Catalonia.

Madrid's imposition of direct rule of Catalonia has proven very unpopular in a region that had enjoyed considerable autonomy before its leaders attempted to break away from Spain.