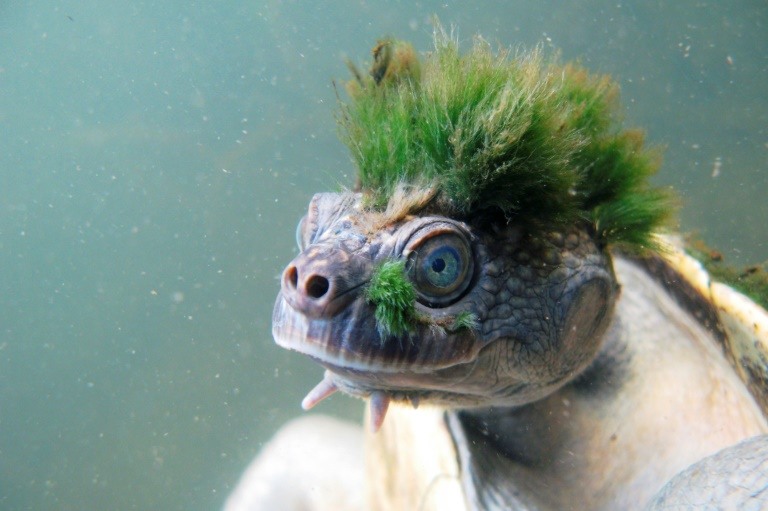 The Australian Mary River turtle, with its punk hairdo.(Photo: AFP)

Boasting a green, punk hairdo and the unusual ability to breathe through its backside, an Australian turtle has become famous overnight -- but not only for its eccentricity.

Unfortunately, just as many of us are discovering the Mary River Turtle's tantalising traits, it has become the latest creature to join the "EDGE of Existence" list of endangered species compiled by the Zoological Society of London (ZSL).

A native of Queensland, Australia, the turtle was one of 100 reptiles added to the catalogue this week.

It lives only in the Mary River from which it took its name.

The inventory has no shortage of weird and wonderful creatures -- a limbless lizard, the world's largest sea turtle, a blind snake, and a chameleon named after Tarzan.

But the Mary River Turtle might just be the strangest of them all.

"The turtle is highly distinctive," states a ZSL description of the species known to scientists as Elusor macrurus.

It can breathe underwater through specialised glands in butt organs known as cloaca -- orifices through which the turtle excretes urine and waste, and lays eggs.

"This turtle is able to spend so much time underwater -- up to three days -- without coming up for air due to its strange ability to breathe through its bum," Rikki Gumbs of the Imperial College London, who helped compile the EDGE reptile list, told AFP.

"They have specialised organs in their cloaca which process oxygen from the surrounding water."

But perhaps the computer screen-sized turtle's most distinguishing feature is the bright green, spiky mohawks sprouting on the heads of some.

This is not hair, but algae.

"The Mary River Turtle spends so much time submerged underwater that some individuals become covered in algae -- and can end up with some pretty impressive bright green hairstyles!" said Gumbs.

According to Australia's department of the environment, the Mary River Turtle's rapid decline was sparked by its popularity as a house pet in the 1970s and 80s, known then as the "Penny Turtle".

The creature was only recognised and listed as a distinct species in 1994.

"The Mary River Turtle takes an exceptionally long time to reach sexual maturity, with individuals not breeding before the age of 25," said the ZSL.

Destruction of the creatures' natural habitat through the building of dams, as well as the collection of its eggs for the pet trade, piled on the survival pressure.

"Reptiles often receive the short end of the stick in conservation terms, compared with the likes of birds and mammals," added Gumbs.

"Just as with tigers, rhinos and elephants, it is vital we do our utmost to save these unique and too-often overlooked animals. Many EDGE reptiles are the sole survivors of ancient lineages."

The EDGE reptile list also includes the Madagascan blindsnake -- a pink, wormlike creature that spends its life burrowing through forest soil-- the freshwater "pig-nosed" turtle which uses its distinctive appendage as a snorkel, and the leatherback turtle which can weigh over 900 kilogrammes (1,980 pounds).