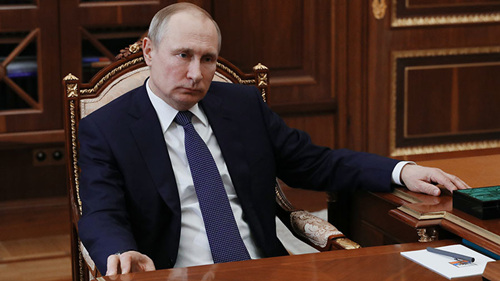 Moscow (People's Daily) - Russian President Vladimir Putin said in a statement on Saturday that the strike launched by the United States and its allies was "an act of aggression" that will exacerbate humanitarian catastrophe in Syria and that Russia strongly condemns it.

"By its actions, the United States is increasingly exacerbating the humanitarian catastrophe in Syria and bringing sufferings to civilians and actually conniving at terrorists who have been tormenting the Syrian people for seven years and provoking a new wave of refugees from that country and the region as a whole," Putin said. 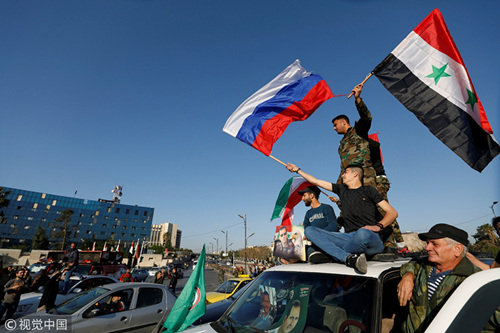 Syrians wave Russian and Syrian flags during a protest against US-led air strikes in Damascus, Syria on Apr.14, 2018. (Photo: VCG)

"One again, just like a year ago when the US attacked Shayrat Airbase in Syria, a staged chemical attack against civilians was used as a pretext, this time in Douma, a Damascus suburb. Russian military experts who visited the site of the alleged incident found no traces of the use of chlorine or other chemical agents. Not a single local resident confirmed that a chemical attack had taken place," the Kremlin press service quotes him as saying.

Washington launched "an aggression against a sovereign state which is at the forefront of the fight against terrorism," the statement from the president said. Putin stressed that the multi-national strikes were not sanctioned by the UN Security Council, and were carried out “in violation of the UN Charter and principles of international law."

What's more, the current escalation of the Syrian crisis has "a devastating impact on the whole system of international relations.

By using force, Washington is only prompting a new wave of asylum-seekers from Syria and the whole region, according to the Russian leader. 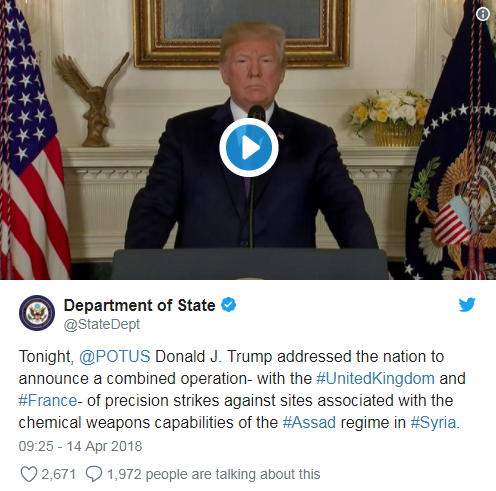 "A short time ago, I ordered the United States armed forces to launch precision strikes on targets associated with the chemical weapons capabilities of Syrian dictator Bashar al-Assad," said US President Donald Trump in a primetime address from the White House Diplomatic Reception Room on Sayurday. 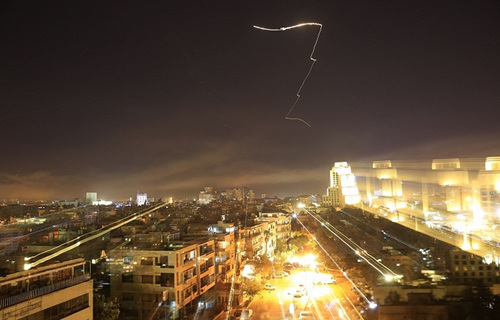 UK and France were in conjunction with the US to carry out the operation.

"We have warned that such actions will not remain without consequences. All responsibility for them rests upon Washington, London and Paris," said Russia’s ambassador to US Anatoly Antonov in a statement on Friday

Antonov stressed that "insulting the Russian president was inadmissible."

"The United States, a country that has the largest arsenal of chemical weapons, has no moral right to accuse other countries," he said. 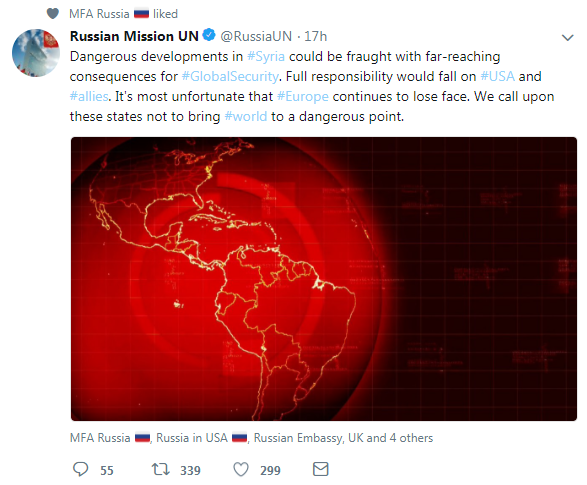 "Dangerous developments in Syria could be fraught with far-reaching consequences for GlobalSecurity. Full responsibility would fall on USA and allies. It's most unfortunate that Europe continues to lose face. We call upon these states not to bring world to a dangerous point," the Russian Mission in UN said on Twitter.