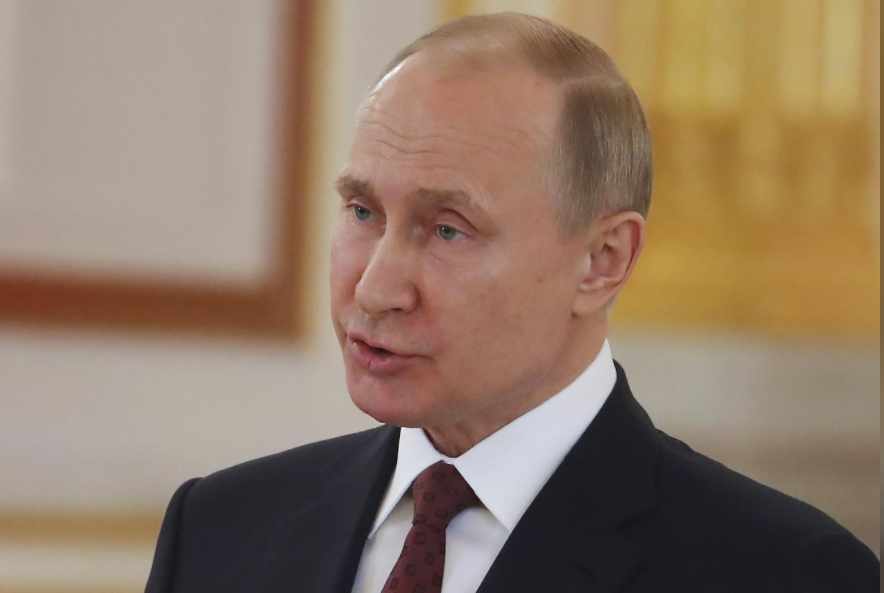 Russian President Vladimir Putin speaks during a ceremony to receive credentials from foreign ambassadors at the Kremlin in Moscow, Russia April 11, 2018. (Photo: Reuters)

Russian President Vladimir Putin warned on Sunday that further Western attacks on Syria would bring chaos to world affairs, while signs emerged that Moscow and Washington want to pull back from the worst crisis in their relations for years.

Putin made his remarks in a telephone conversation with Iranian counterpart Hassan Rouhani after the United States, France and Britain launched missile strikes on Syria on Saturday over a suspected poison gas attack.

A Kremlin statement said Putin and Rouhani agreed that the Western strikes had damaged the chances of achieving a political resolution in the multi-sided, seven-year conflict that has killed at least half a million people.

“Vladimir Putin, in particular, stressed that if such actions committed in violation of the UN Charter continue, then it will inevitably lead to chaos in international relations,” a Kremlin statement said.

The attacks struck at the heart of Syria’s chemical weapons program, Washington said, in retaliation for a suspected poison gas attack a week ago. All three participants insisted the strikes were not aimed at toppling President Bashar al-Assad or intervening in the conflict.

The bombings, hailed by US President Donald Trump as a success but denounced by Damascus and its allies as an act of aggression, marked the biggest intervention by Western countries against Assad and ally Russia, whose foreign minister Sergei Lavrov called them “unacceptable and lawless”.

When asked whether Russia was prepared to work with the proposals of Western countries at the United Nations, Ryabkov told TASS news agency: “Now the political situation is extremely tense, the atmosphere is extremely electrified, so I will not make any predictions.

“We will work calmly, methodically and professionally, using all opportunities to remove the situation from its current extremely dangerous political peak.”

“In the US administration there are specific people who it is possible to talk with,” said Ermakov, head of the ministry’s department for non-proliferation and arms control.

In Damascus, Syria’s deputy foreign minister, Faisal Mekdad, met inspectors from the global chemical weapons watchdog OPCW for about three hours in the presence of Russian officers and a senior Syrian security official.

The inspectors were due to attempt to visit the site of the suspected gas attack in Douma on April 7, which medical relief organizations say killed dozens of people. Moscow condemned the Western states for refusing to wait for OPCW’s findings before attacking.

Mekdad declined to comment to reporters waiting outside the hotel where the meeting took place.

Russia denounced allegations of a gas attack in Douma and said it was staged by Britain to whip up anti-Russian hysteria.

In an indication that the West, too, would prefer to lower tensions, the United States and Britain both reiterated that their military action on Saturday was not aimed at Assad, Putin’s ally, only at his use of chemical weapons.

Speaking to the BBC, Britain’s Foreign Secretary (Minister) Boris Johnson said that Western powers had no plans for further missile strikes, though they would assess their options if Damascus used chemical weapons again.

Asked about US-Russia relations, US ambassador to the United Nations Nikki Haley said ties were “very strained” but that the United States still hoped for a better relationship.

Haley said that the United States would not pull its troops out of Syria until its goals were accomplished. Speaking on Fox News Sunday, Haley listed three aims for the United States: ensuring that chemical weapons are not used in any way that poses a risk to US interests, that Islamic State is defeated and that there is a good vantage point to watch what Iran is doing.

Trump has made clear he wants to withdraw the roughly 2,000 US troops involved in the anti-Islamic State campaign in Syria. But he appeared to contradict that message when he said on Saturday that Western allies were prepared to “sustain” the military response if Assad does not stop using prohibited chemical weapons.

British opposition leader Jeremy Corbyn said the legal basis used to support the British role was debatable, adding that he would only support action backed by the UN Security Council.

“I say to the foreign secretary, I say to the prime minister, where is the legal basis for this?” Corbyn said in an interview with the BBC.

In Damascus, Assad told a group of visiting Russian lawmakers that the Western missile strikes were an act of aggression, Russian news agencies reported.

Syria released video of the wreckage of a bombed-out research lab, but also of Assad arriving at work as usual, with the caption “morning of resilience” and there were no immediate reports of casualties.

Russian agencies quoted the lawmakers as saying that Assad was in a “good mood”, had praised the Soviet-era air defense systems Syria used to repel the Western attacks and had accepted an invitation to visit Russia at an unspecified time.

President Trump had said “mission accomplished” on Twitter after the strikes, though US Lieutenant General Kenneth McKenzie at the Pentagon acknowledged elements of the program remain and he could not guarantee that Syria would be unable to conduct a chemical attack in the future.

Russian and Iranian military help over the past three years has allowed Assad to crush the rebel threat to topple him.

The United States, Britain and France have all participated in the Syrian conflict for years, arming rebels, bombing Islamic State fighters and deploying troops to fight the militants. But they have refrained from targeting Assad’s government, apart from a volley of US missiles last year.

Most Gulf stock markets rose on Sunday, supported by firm oil prices and relief that the weekend’s military attack on Syria was relatively limited in scope and there was no immediate retaliation.

Internationally, gold and oil are expected to extend gains on Monday, albeit modestly, when the markets open for the first time since the missile attack. Equities and bonds are unlikely to suffer big losses unless the West strikes again or Russia retaliates.

Gold has benefited in recent days as a safe-haven asset amid a US-China trade dispute and the escalating conflict in Syria, which also pushed oil above $70 a barrel on concerns over a spike in Middle Eastern tensions.

The strikes suggest that Trump may have reset America’s red line for military intervention in Syria over the use of chemical weapons.

In Washington, a senior administration official said that “while the available information is much greater on the chlorine use, we do have significant information that also points to sarin use” in the attack.

Sarin had previously appeared to be the threshold for intervention. Chlorine, in contrast, has been used more widely in Syria’s conflict without past US reprisals and is far easier to find and weaponize, experts say.

Washington described the strike targets as a center near Damascus for the research, development, production and testing of chemical and biological weapons; a chemical weapons storage site near the city of Homs; and another site near Homs that stored chemical weapons equipment and housed a command post.

Iranian Supreme Leader Ayatollah Ali Khamenei described the attack as a crime and the Western leaders as criminals, while UN Secretary-General Antonio Guterres urged all Security Council members to use restraint but said charges of chemical weapons use demand investigation.

Meanwhile, Pope Francis called on world leaders to renew efforts to bring peace to Syria, saying he was deeply troubled by their failure to agree on a joint plan to end the bloodshed.