HEADLINE Q&A: What will US freezing Palestinian aid mean?

Q&A: What will US freezing Palestinian aid mean?

The US government has frozen tens of millions of dollars in contributions to the UN agency for Palestinian refugees, UNRWA. What is UNRWA and what will the impact be?

The United Nations Relief and Work Agency (UNRWA) was established following the war surrounding the creation of Israel in 1948, in which more than 700,000 Palestinians either fled or were forced from their homes.

It provides aid for these people and their descendants. Around five million Palestinians across the Middle East, including in Gaza, the West Bank, Jordan, Lebanon and Syria, are eligible.

Much of this is in the form of education -- UNRWA employs more than 20,000 teachers -- but also health and financial support.

- What has Trump suspended? -

The United States is the largest single donor to UNRWA, providing more than $350 million last year. The next largest, the European Union, donated less than half that figure. 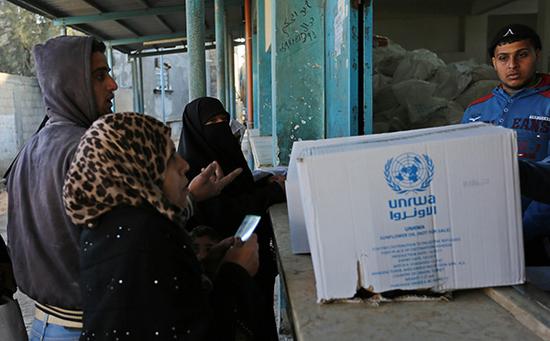 On Tuesday, it announced it would freeze $65 million, while allowing $60 million through to keep the agency running in the short term.

This was the first set of payments for the year and it is not clear if later payments would be similarly affected.

State Department officials insisted the decision was not taken to pressure Palestinian leaders, but because the US wants other countries to help pay for and reform UNRWA.

Israeli politicians say UNRWA’s existence perpetuates the conflict and think refugees in neighbouring countries should be incorporated into those societies.

Palestinians say UNRWA is a crucial lifeline for impoverished people across the region and is necessary until a final resolution to the Israeli-Palestinian conflict is found.

They also point out the United States provides more than $3 billion a year in military aid to Israel.

Relations between the US administration and the Palestinian leadership have all but broken down in recent weeks following Trump's controversial December 6 recognition of Jerusalem as Israel's capital.

The Palestinians, who see the eastern part of the city as the capital of their future state, reacted furiously to the decision, freezing ties with Trump's administration and saying the US can no longer be the mediator in peace talks with Israel.

Palestinian president Mahmud Abbas is expected to shun Vice President Mike Pence when he visits the region next week.

On January 2, Trump on Twitter accused the Palestinians of rejecting negotiations with Israel.

"We pay the Palestinians HUNDRED OF MILLIONS OF DOLLARS a year and get no appreciation or respect," Trump wrote.

Abbas shot back on Sunday using a common Arabic expression of frustration, saying to Trump "may God destroy your house. When have we rejected (negotiations)?"

While the State Department said the freeze was only intended at reforming UNRWA, Trump also faces domestic political pressure to please his right-wing base.

In 2015, the agency nearly closed all its schools due to financial shortfalls, and the organisation carried over a deficit of tens of millions of dollars last year.

The fear is that the cut will lead to schools and even hospitals closing for Palestinians, though UNRWA's head Pierre Krahenbuhl said the $60 million would enable them to keep them open in the short term at least.

UNRWA spokesman Chris Gunness said Wednesday the cut would lead to the "most severe funding crisis in the history of the agency".

Abbas will meet European Union officials in Brussels in the coming days and may well ask for their support in filling the funding hole.

European diplomats, however, say the chances of major funding increases are limited, with the Gulf Arab states another potential option.