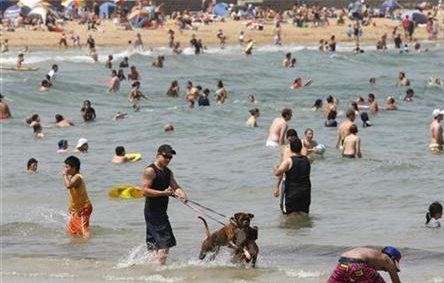 Sydney (People’s Daily) —Heatwave records were shattered across Australia over the week with temperatures reaching far above normal with some breaking century-oldnumbers, according to reports from the Herald Sun in Melbourne.

In the city of Darwin, located in the Northern Territory, extreme humidity and what scientists call the “pressure cooker effect” has seen temperatures soar to a sweltering 113 – 152 degrees Fahrenheit, making the Beagle Gulf city practically unlivable.

Landlocked cities like Queensland are any better off as meteorologistshave predicted another seven days of rising temperatures.

“Everything is hotter than normal,” said Greg Browning, from the Bureau of Meteorology.

Australian National University’s Dr. Elizabeth Hanna, a leading climate change expert, said it was the Top End’s tropical humidity that was too blame.

“We can cope with much higher temperatures in Melbourne because the air is drier, but in Darwin the high temperatures and humidity are oppressive,” she explained and added, “if it gets worse, those unpleasant times of the year will extend longer and longer making it not a viable place to live.”

Darwin isn’t the only heatwave victim in this latest temperature swell.

In the nation’s capital of Sydney, temperatures have shattered a 49-year-old heat record.  The city’s Central Business District (CBD) is normally cooled by winds coming off the ocean and die out as they move further inland.

“If we can’t find a way to make our cities cooler, they will eventually become uninhabitable,’ said High-Performance Architecture Professor, Mattheos Santamouris, at the University of New South Wales (UNSW).

Santamouris is working with the NT Government to see how Darwin can ease temperatures.

“Global temperatures are going so badly and emissions are increasing so much that it’s not looking good,” said Dr. Hanna.