Regulators should pull up drawbridge against waves of illegal foreign tutors

Rarely has China been as open as now to the world, so does its thirst for foreign teachers as an important adjunct of English-language learning. Over two-thirds of Chinese parents tend to choose training agencies to help their children learn the language, with a disproportionate eagerness for foreign tutors, said the report of IRearch, a consultancy. (See Chart 1)

Yet the booming demand that fuels the language craze also puts the educational sector at stake. Last Monday a verdict in Beijing against a group of people who faked the permit to engage in English teaching unveiled the shady businesses beneath the training market.

The case involved in outlawed employment an internationally superior kindergarten offered to a Serbian tutor without legitimate teaching qualification in 2016. A broker agency helped the school's manager, surnamed Xia, contend with the trouble, by forging permit certificates. However Foreign Ministry staff intercepted the application and police arrested suspects, including foreigners. 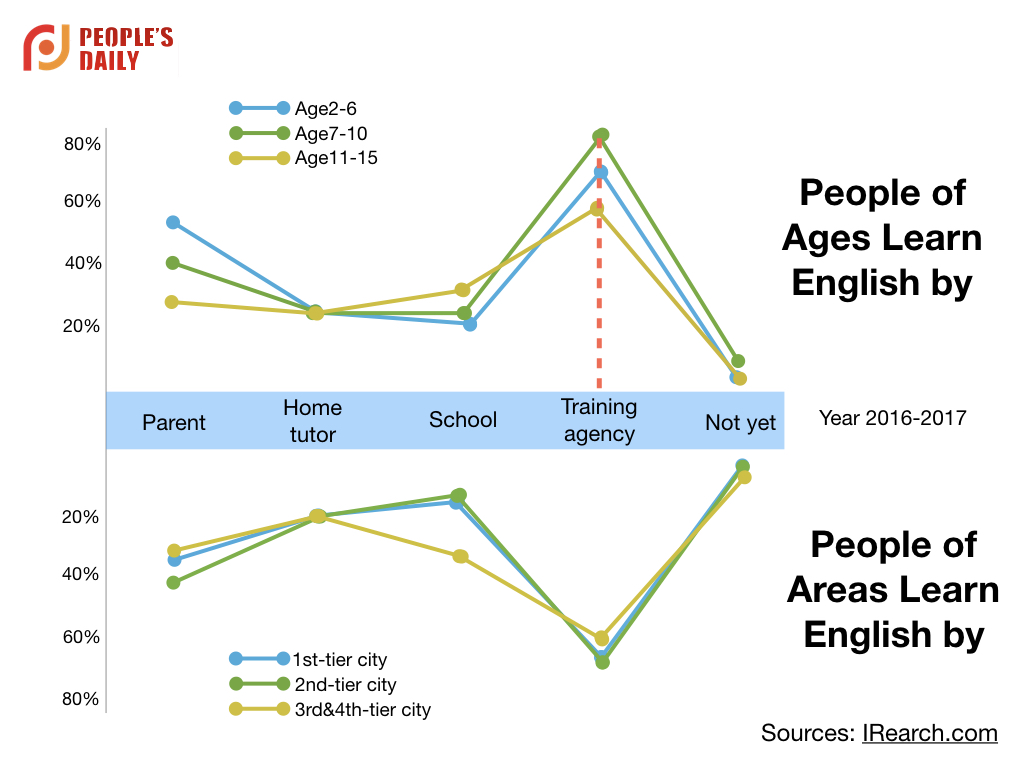 More news reports exposed similar cases to the public. Some foreign tourists exchanged tutoring for funding their stay in China, said China Youth, a newspaper. Most of them hold study or tourist visas with a short period of stay, or aren't teachers at all. Therefore what probably Chinese children obtain in class is a scattered teaching schedule, a mix of weird accents or even radical values of some foreign extremists that may negatively impact youngsters' future life.

How it strays into wrong path

Causes of such misbehaviors seem complicated, whereas the primary push lies in the huge demand-supply gap, which has widened in recent years.

Training agencies are competing avidly for foreign teachers who are presumably adept at oral and listening skills, as China gets more connected to the world. As a result, whether an agency has foreign tutors (never mind permit certificates) weighs heavily in frantic parents' favor of some school.

Things go beyond that. Some units throughout one's education life, such as kindergartens, primary schools and so forth, have a tendency to hold foreign tutors as a necessity. However, the legal foreign supply is scarce, especially by Chinese population standards.

Therefore, the fever's outlet mainly relies on a vast import of tutors from Western countries but without legal certificates. There were more than 400,000 foreign education staff in China by 2017, but only one-third of which operate legitimately, according to Foreign Expert Bureau, China's governmental body partly in charge of international talents introduction.

Chinese parents who want their children to win at the starting-line are also responsible for the unhealthy training market. They argue that agencies equipped with dozens of foreign tutors are more professional than those without one. Some even take it to the extreme, maintaining that a foreigner, even if with no teaching experience, is better than native one in language practices. (See Chart 2)

As China Youth reported, the salary earned by white English-language teachers is at least four times than that paid for their counterparts. No worry for qualification, experience or whatever, a foreign face is good enough to attract students especially among mediocre urban areas.

The low cost of no-permit tutors allures agencies to risk the path. In southern China's city Shenzhen, the yearly-salary paid for a qualified foreign tutor surpasses 200,000 yuan ($32,000). In contrast, the burden can be lavishly sliced if it reverts to non-standard procedure.

The 4-month-long approval also pushed schools to the other side, in which foreign tutors can start classes following a within-one-week procedure, analyzed Zhang Wenjing, the director of Haoweilai, a English-language training agency.

Where should the regulations head

Amid so many market shortcomings, regulators have no excuse of being not guilty. Shouldn't they be largely blamed? Partly right.

Some argue that the loophole lies where training agencies loosen the screening process. Because most of universities have a much lower rate of non-permit foreign tutors, owing to a stricter introduction. "All the certificates will be examined for at least three rounds, and the police efforts will also join in," said the faculty director of Beijing Foreign Studies University. Foreign teachers have to complete their teaching schedule as required, and any alleged ethnic misbehaviors will end their job contract.

Yet the regulation should be blamed for failing to strengthen the anti-fake mechanism. For now, brokers for copying certificates are rarely punished, and the cost for obtaining fake permit is on average as low as 3,000-6,000 yuan ($477-955).

Optimistically, the weakness helps regulators target their efforts. Police and foreign-relevant officials team up to strictly control the hiring of foreign teaching staff and lift the punitive levels towards those involved in misconduct in and out of class. In the fake-certificate verdict mentioned above, the court in Beijing announced that two foreign tutors would be expelled from the country and the suspected agency staff would face an 8-month imprisonment.

Proposals to perfect relevant laws loom. No specific laws currently are ready to apply to misbehaviors of foreign tutors. Legislation should define their rights and duties in China. Besides, organizations should be set up, with a yearly evaluation of qualifications, capabilities and ethnic values of foreign teachers, said Zhang Fucheng, the vice-president of Yanshan University.