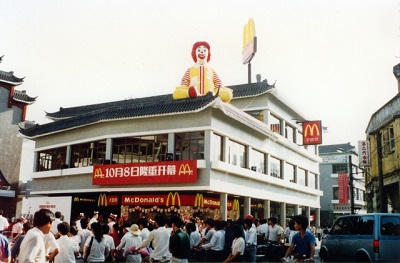 McDonald's in the 1990s in China: banner saying "to be open on October 8". Photo: McDonald's China website

McDonald's China renamed its brand name to Jingongmen, or Golden Arch, on October 12 in an obvious attempt to cater to picky customers and fierce competition in China.

To its surprise, the low-key name change has sparked controversy among Chinese customers and Internet users.

Some netizens argue the new name is not as elegant, which is likely to turn off many customers.

Insiders said one of the reasons for the name change is the "M" Logo looks like arches and the modification stays only on documents and not on the restaurants. McDonald's sold the bulk of its Chinese mainland and Hong Kong business to domestic financial conglomerate CITIC Group and American investment company Carlyle Capital in January.

When asked whether it's a way for McDonald's to exit the Chinese market by selling most of its Chinese mainland and Hong Kong interests, McDonald's CEO Steve Easterbrook said, "China will soon become our largest market outside of the United States. Mainland China and Hong Kong are leading the global system in capturing new consumer trends, such as delivery and digitalization, and it's driving strong performance and growth momentum... It will allow McDonald's to become the leading force in the fastfood sector in mainland China and Hong Kong."

In recent years, McDonald's has shifted its attention to East Asia, especially to China. On the capital level, the name change caters to the market, embracing opportunities in a rising China. The move itself is testament to China's economic influence and China's growing impact in the world.

The fastfood giant opened its first franchise in Shenzhen in 1990, when the majority of Chinese people were struggling to eke out a living. McDonald's was seen as an exotic high-end restaurant, selling fancy American food such as French fries and hamburgers, which could only be seen in TV or Western movies.

After enjoying phenomenal growth, McDonald's has always been reluctant to localize compared with its arch rival, KFC. The latter added Chinese food to its menu in 2002 to grab customers' stomach amid the virally rising of home-grown fast food restaurants.

In the eyes of many Chinese, many foreign fast-food restaurants are synonymous to junk food for their lack of nutrition and fried food. In 2016, McDonald's' market share in China declined to 13 percent.

McDonald's responded by introducing mantou (steamed buns), and porridge into its breakfast menu two years ago. It continued to add Chinese  cuisine to its food line-up, and added new choices every four weeks, such a frequency not only helps promoting sales, but also attracts the returns of younger customers.

The long overdue revamp of its menu did not come from nowhere. It's a recognition of the impact of China's rapid development, which is positive, motivational, as well as inevitable.

China's rapid growth has brought the world tangible benefits and win-win results, as has offered the world infinite opportunities. In August, McDonald's announced an ambitious plan to increase the number of restaurants in China from 2,500 to 4,500 by 2022.