Rescuers were focusing on an apartment block and a nearby hotel, both of which were leaning dangerously

Rescue workers pulled survivors and bodies from buildings tilting precariously in the Taiwanese city of Hualien Wednesday after an overnight earthquake killed at least seven people, injured more than 250 and left dozens missing.

Emergency responders were focusing on a 12-storey apartment block and a nearby hotel, both of which were leaning dangerously with their lower floors pancaked after the 6.4-magnitude quake hit the popular tourist city late Tuesday.

The national fire agency said seven people had been killed across the city, and 260 were injured.

There were grave concerns for the badly leaning Yun Tsui residential building, which also housed a restaurant, shops and a hostel.

Dozens of residents -- and several pets -- were rescued with ropes, ladders and cranes. But fire department staff at the site told AFP at least four bodies had been pulled out of the building in the day.

Of those still missing, the Hualien disaster relief centre said, 39 are residents at the apartment block and 13 are guests at the Beauty Stay Hotel -- which is on the bottom floors of the Yun Tsui building.

One of the people killed at the apartment block was a woman from mainland China, authorities said.

Officials temporarily suspended rescue efforts over fears the building might slip further as engineers raced to push large concrete blocks and steel bars to support the leaning side.

Rescue efforts continued as night fell, with emergency responders wielding crowbars and torches to search the lower floors for survivors.

Continual aftershocks forced rescuers searching the apartment block to run for safety every time they struck. The responders would go back inside when the tremors stopped.

The strongest of them was a shallow 5.7-magnitude quake that was felt as far away as the capital Taipei, around 120 kilometres (75 miles) north of Hualien.

One resident who lives nearby told AFP how he watched the tower block partially collapse.

"I saw the first floor sink into the ground. Then it sank and tilted further and the fourth floor became the first floor," said Lu Chih-son, 35, who saw 20 people rescued from the building. 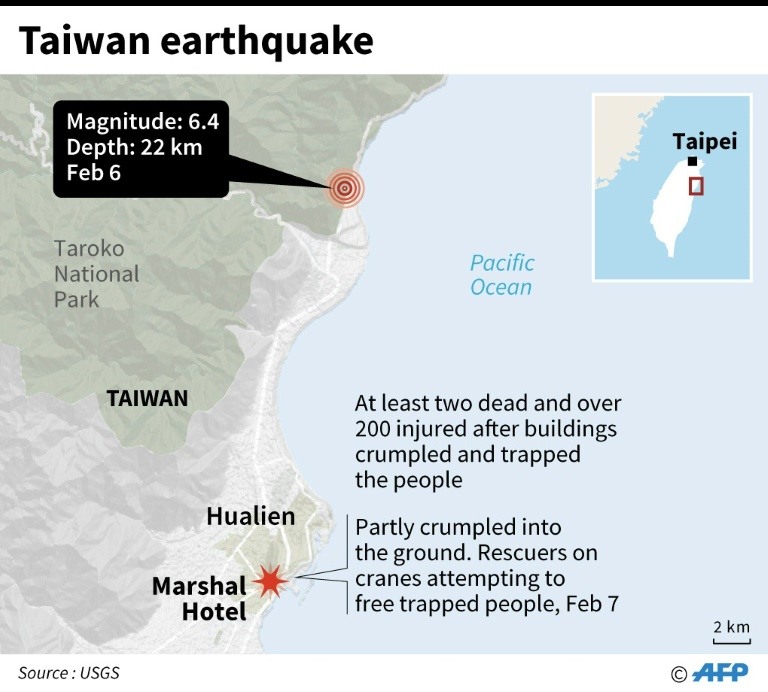 Chen Chih-wei, 80, said he was sleeping in his apartment on the top floor of the building when the quake struck.

"My bed turned completely vertical. I was sleeping and suddenly I was standing," he told AFP.

Chen said he managed to crawl to a balcony to wait for rescue, adding that the quake was the strongest he had felt in more than five decades of living in Hualien.

At the Marshal Hotel, which was also leaning and badly damaged, at least two people were killed when the lower floors collapsed. But most residents got out and authorities said they believed no more people were trapped inside.

President Tsai Ing-wen visited the apartment block Wednesday morning. "Now is the prime time for our rescue efforts, our first priority is to save people," she said in a Facebook post. 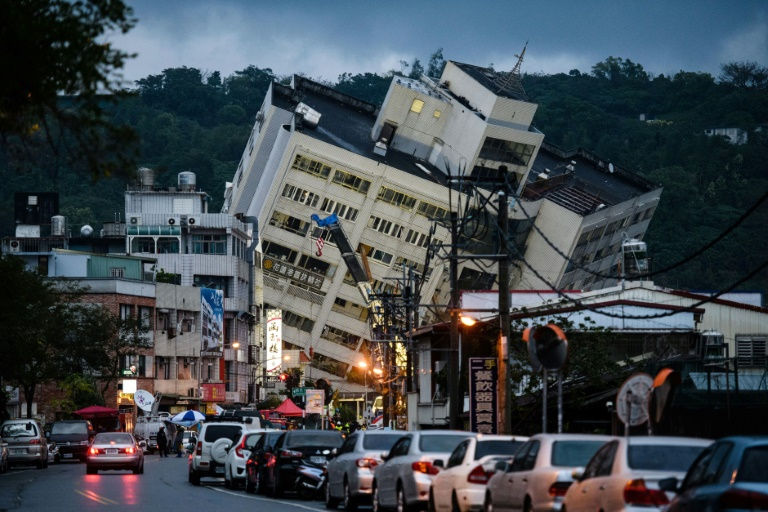 Hualien is one of Taiwan's most popular tourist hubs as it lies on the picturesque east coast rail line and near the popular Taroko Gorge.

Local resident Blue Hsu said some of those carried out of the hotel were foreigners.

"The lower floors sunk into the ground and I saw panicked tourists being rescued from the hotel," Hsu told AFP.

Some 830 people were in shelters, officials said, while 1,900 houses were without power.

Pope Francis expressed solidarity with the victims and encouraged emergency responders in a statement issued by the Vatican on Wednesday.

"His Holiness willingly invokes upon all the Taiwanese people the divine blessings of strength and peace," the statement said.

The quake hit just before midnight (1550 GMT) around 21 kilometres (13 miles) northeast of Hualien, according to the USGS.

It followed almost 100 smaller tremors to have hit the area in the last three days and comes exactly two years since a quake of the same magnitude struck the southern Taiwanese city of Tainan, killing more than 100 people.

Most of the deaths from the February 2016 earthquake were from the 16-storey Wei-kuan apartment complex, which toppled on its side and buried many residents in the rubble.

The safety of the building was called into question immediately after the disaster, when metal cans and foam were found to have been used as fillers in the concrete and residents said there had been cracks in the structure.

Five people were found guilty over the disaster, including the developer and two architects.

Taiwan lies near the junction of two tectonic plates and is regularly hit by earthquakes.

The island's worst tremor in recent decades was a 7.6-magnitude quake in September 1999 that killed around 2,400 people.