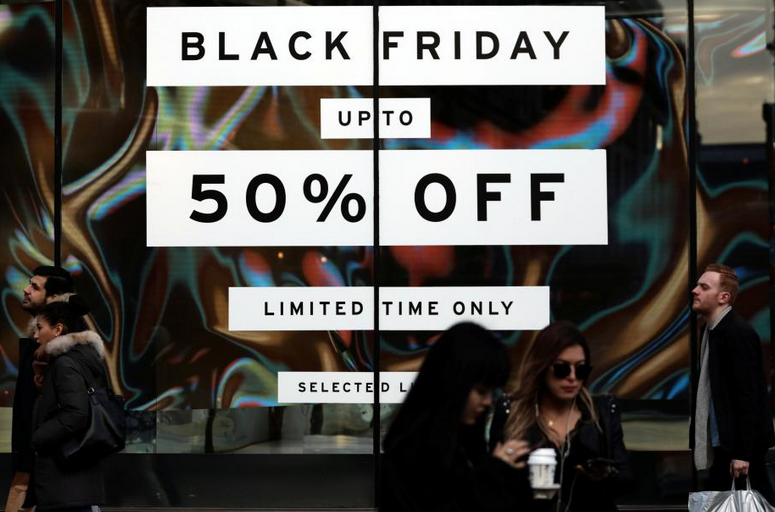 Pedestrians walk past a sign in a store window on Oxford Street on 'Black Friday' in London, Britain November 24, 2017. REUTERS/Simon Dawson

Retailers across Europe chased shoppers on “Black Friday” in a test of consumer demand, particularly in Britain, where the spending spree imported from the U.S. looked set to outdo last year.

After last month suffering their biggest decline in sales volumes for four-and-a-half years, British retailers are pinning their hopes on discounts to get shoppers squeezed by inflation and subdued wage growth spending again.

In Britain, the annual promotional event, traditionally focused on electrical goods, has been mainly played out online since 2014, when in-store sales were marred by scuffles.

The jury remains out on whether retailers make money by cutting prices in an event that was imported to Britain from the United States by online retailer Amazon (AMZN.O) in 2010.

“Consumers may be opting to buy more goods at a lower price rather than investing in a handful of higher-value items,” said Barclaycard’s Paulette Rowe.

Department store John Lewis [JLP.UL] said its busiest shopping hour had been 9-10 a.m., with an average 705 items ordered per minute.

The research firm GlobalData forecasts that UK spending in the period Nov. 20 to 27 - will be up 3.8 percent from last year at 10.1 billion pounds.

Critics say the discounts drag forward sales that retailers would otherwise have made at full price at Christmas, and can dampen business in subsequent weeks.

As last year, retailers including Britain’s biggest, Tesco (TSCO.L), and Amazon are stretching their promotions over up to two weeks, hoping to smooth out demand and reduce pressure on supply and distribution networks.

Clothing retailer Next (NXT.L) joined Black Friday for the first time with price cuts of up to 70 percent. A spokesman for the firm said it was an experiment to see what effect offering discounts on the previous season’s stock, normally sold in the Boxing Day sale, would have on full-price sales.

“Categorically we have not got a stock problem,” said the spokesman. Shares in Next fell up to 1.7 percent.

Black Friday, the day after the U.S. Thanksgiving holiday, was so named because spending would surge and often push retailers into the black for the year.

Its impact is also being felt across Europe.

In Germany, sales promotions on Black Friday and Cyber Monday (Nov. 27) are expected to add around 1.7 billion euros ($2 billion) to retailers’ revenues, roughly on a par with 2016, a survey by trade body HDE found.

About 8 million French consumers are expected to shop from Friday to Monday, yielding expected revenue of 945 million euros, according to a study by Kantar TNS for the U.S e-commerce firm eBay.

In Denmark, supermarket chains Bilka and Fotex said their websites had been taken down by cyber attacks at the launch of their Black Friday campaigns.

But Black Friday has had a slow pick-up amongst Spaniards, who traditionally exchange presents on Epiphany (Jan. 6). Just 22 percent intended to make a purchase on Black Friday or Cyber Monday, according to a survey by Metroscopia for the newspaper El Pais.

It was more subdued in Greece, where the economy contracted by more than a quarter between 2008 and 2016. “People don’t have money to spend,” said 32-year-old Athens shopper George Christopoulos.