The first TV program featuring a robot combat in China, King of Bots, was launched on Zhejiang Television. With more and more reality shows taking over television, very few focus on science and technology. King of Bots has gained popularity with its special perspective on robot combat and the popularization of robot technology. 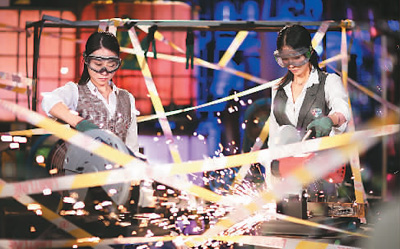 Combat robots have a relatively short history in China, but the contestants from colleges and universities were creative enough to showcase the competitiveness of their robots. Two female PhD students from Tsinghua University developed primary and secondary robots, and students from Zhejiang University won the RoboCup Iran Open. These contestants showcased vitality and creativity on the TV contest.

Robot combat shows are not alien to international audiences, with Robot Wars from Britain and Battle Bots from the US getting good ratings abroad. The Chinese TV show has taken a similar format as Battle Bots, making the standard weight of robots 110 kilograms, the highest level of combat robots. The time of competition for different groups of contestants is limited to 3 minutes.

Compared with foreign programs, King of Bots doesn't set a powerful home player like Robot Wars. The show adds more commentary for the audience to know the details. It puts no limits to the background of the contestants, with a 12-year-old student, farmers, senior retired workers all involved in the show.

As the audience said, King of Bots has made many people's childhood dreams of owning a robot come true. Kids who watch the show may dream about being a scientist when they grow up. The show also breaks the stereotype of TV shows, setting up a platform of an international competition for all robot lovers around the world.