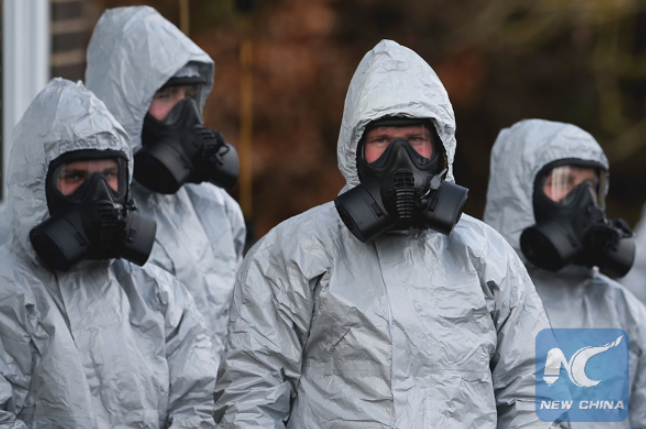 Personnel in protective coveralls and breathing equiptment work at the Salisbury District Hospital in Salisbury, southern England, on March 10, 2018. ( Photo:AFP)

Russia, while denying any involvement in the poisoning of a former Russian spy, is ready to cooperate with Britain in the investigation of the incident in accordance with international law, Russian Foreign Minister Sergei Lavrov said Tuesday.

"Russia is innocent and Russia is ready to cooperate in accordance with the Chemical Weapons Convention if the United Kingdom condescends to honoring its international legal obligations related to the mentioned document," Lavrov told a press conference in Moscow.

Former Russian intelligence officer Sergei Skripal and his 33-year-old daughter Yulia, a Russian citizen, were found unconscious on a bench at a shopping center in the district of Salisbury, England, on March 5. They remain in critical condition in hospital, according to reports.

British Prime minister Theresa May said in a statement to the House of Commons Monday that evidence showed Skripal had been targeted by a "military-grade nerve agent of a type developed by Russia." She has demanded an explanation from Moscow by Tuesday.

Skripal, 66, was sentenced in Russia in 2006 to 13 years in prison for cooperating with the British Secret Intelligence Service and releasing names of Russian intelligence officers working undercover in Europe.

In 2010, the former double agent was pardoned as part of a spy swap and then moved to Britain.

Lavrov said both Russia and Britain are parties to the 1997 Convention on the Prohibition of the Development, Production, Stockpiling and Use of Chemical Weapons and on their Destruction.

Following the news of the poisoning, Russia, in accordance with the convention, sent a request to the British authorities to obtain a specimen of the substance used and to be granted access to the investigation, but did not receive a reply, Lavrov said.

"If those procedures that are envisaged in the convention are fulfilled, I assure you that the Russian Federation will fulfill its obligations and respond to the corresponding request within the period prescribed for the preparation of the response," Lavrov said.

Also on Tuesday, Russian Federation Council Chair Valentina Matviyenko called the allegations that Russia was involved in the poisoning "a provocation against Russia" and an attempt to accuse Russia groundlessly.