Russia denies reports of use of chemical weapons by Syrian forces 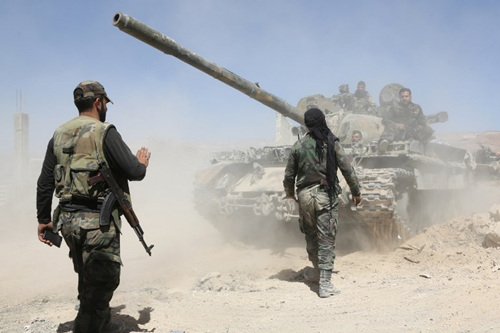 Pro Syrian regime forces are seen as they advance towards the town of Douma, the last opposition holdout in Eastern Ghouta, on April 7, 2018. (Photo: AFP)

The purpose of the "groundless" reports on Saturday is to protect "terrorists" and radical opposition and justify possible military actions from abroad, the ministry said in a statement.

"It is necessary to warn once again that military intervention under far-fetched and fabricated pretexts in Syria, where Russian servicemen are located at the request of the legitimate government (of Syria), is absolutely unacceptable and can lead to the most serious consequences," it said.

The Russian military also rejected allegations that Syrian government forces dropped a chlorine barrel bomb in Douma and used other toxic substances in the area, which caused dozens of deaths.

Yuri Yevtushenko, head of the Russian Center for Reconciliation of the Warring Sides in Syria, was quoted by Russia's TASS news agency as saying that the reports were fabricated by so-called independent non-governmental organizations, including the White Helmets, which he said is widely known for its fake news.

After Douma is liberated from militants, Russia is ready to send specialists in radiation, chemical and biological protection to collect data to confirm that these statements are false, he said.

Controlled by the Army of the Islam rebel group, Douma is the last rebel-held area in Eastern Ghouta, a Damascus suburb where Syrian President Bashar al-Assad's troops nearly regained full control thanks to a Russian-backed campaign since February.

Syrian government forces launched a latest offensive on Friday after the rebels breached an evacuation deal and refused to release thousands of kidnapped civilians.