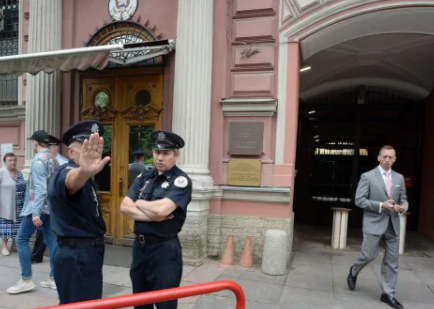 Security offices stand guard last summer outside the US Consulate in St. Petersberg which needs to be clearne by March 31. (Photo: AFP)

A statement on the Foreign Ministry’s website said Jon Huntsman, US ambassador to Russia, was notified beforehand that the move was in retaliation over the recent expulsion of Russian diplomats in the US.

Russia explained the move was in accordance with the principles of diplomatic reciprocity, alleging the US diplomats and consulate personnel were engaged in activities unsuitable for their foreign status.

US consulate personnel in St. Petersburg also have until April 5 to cross the border, and the consulate building needs to be cleared by March 31.

Russian authorities warned Huntsman that US authorities are not to confiscate Russian assets in the US, as such actions would threaten global stability.

Huntsman was also told that Russia would take additional measures against US diplomats and consulate personnel in Russia should any hostile acts occur at the Russian embassy or at any of their consulates in the US.

The statement warned the US government, which has been aggressively undermining Russia's reputation and actively engaging in in anti-Russia activities, that they should cease violating bilateral relations.