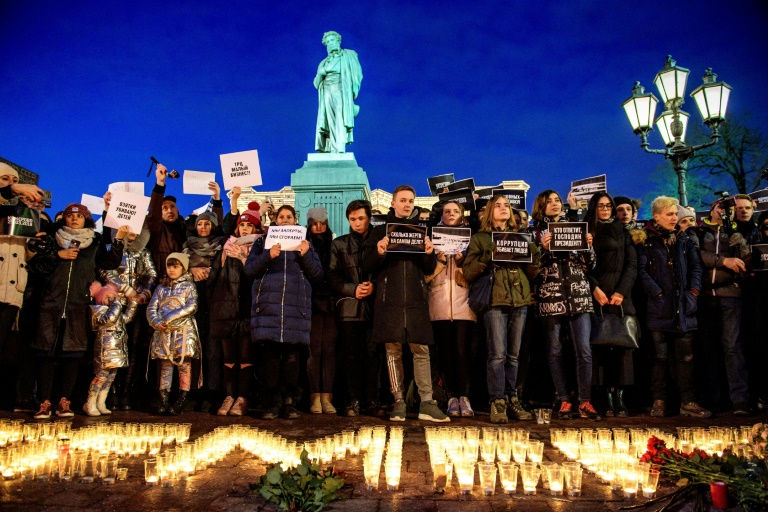 There is widespread public anger in Russia at the safety violations at the mall (Photo: AFP)

Russia on Wednesday held a national day of mourning and buried the first victims of a fire that ravaged a busy shopping centre and killed 64 people, most of them children.

Flags were lowered and entertainment events cancelled three days after Sunday's devastating blaze in the western Siberian city of Kemerovo.

On Tuesday thousands of people had gathered in Moscow and other cities to mourn the victims and vent their anger at the authorities after children were trapped in a locked cinema as the inferno spread through the mall.

The youngest victim was a two-year-old boy, while at least 19 of the 64 people who perished were under 10, said a list published by regional authorities. In total 41 children died in the fire.

A criminal investigation has been opened and five people have been detained over the incident.

President Vladimir Putin -- who was this month re-elected for a fourth term -- on Wednesday asked ministers to observe a minute's silence and called for safety checks at similar shopping centres.

"We need to look at leisure and shopping centres of this kind and this should not be done just on the spur of the moment -- it is absolutely evident that safety must be ensured," Putin said.

He visited Kemerovo on Tuesday after a huge outpouring of public grief and criticism and upbraided officials at a televised meeting.

Russian prosecutors have already ordered checks into fire safety at all shopping centres with leisure facilities.

Putin did not call for legislative changes, saying current laws should be sufficient to ensure public safety.

But many observers said the Kremlin's reaction was insufficient and belated.

"Possibly they didn't want to spoil the positive mood after the elections and there was hope that the tragedy would not turn out to be so large-scale."

Officials have said that multiple safety rules were violated, the fire alarm system was not working and staff did not follow correct emergency procedures. Witnesses reported that one cinema had been locked from the outside.

Regional authorities have come in for particular criticism, since the veteran regional governor Aman Tuleyev -- who lost a young relative in the fire -- has not visited the scene nor met angry residents

On Tuesday, Kemerovo residents packed the main square in a rare protest, some holding placards and shouted slogans calling for the sacking of Tuleyev and Putin.

Kremlin spokesman Dmitry Peskov refused to comment Wednesday on the regional authorities' actions, saying that "Putin has said that it is hardly appropriate to issue hasty judgements".

While Putin was at the scene in Kemerovo, he did not come onto the square to meet the protesters, but talked to a group of locals separately.

- Teacher tried to save others -

In the Kemerovo region, relatives held the first funerals for victims as regional emergencies minister Alexander Mamontov said 27 bodies have been identified.

Several hundred people attended the funeral of 57-year-old Nadezhda Agarkova and her two grandchildren Konstantin, 8, and Maria, 10, who died in one of the mall's cinemas.

"These are our children, our pupils," the children's teacher Svetlana Sazheva told NTV television outside the church, saying the children who died were "top students and well brought up."

Dozens of pupils of Tatiana Darsaliya, an English teacher who died, attended a memorial service in a city cathedral, RIA Novosti reported. She had saved her daughter from the burning cinema but died after going back in to save others, pupils said.

Television broadcasts carried a black ribbon on the screen or a message "Kemerovo -- we mourn."

The front pages of some newspapers were published only in black and white, while Komsomolskaya Pravda tabloid covered its front and back pages with photos of the victims.

Investigators have said the most likely cause of the fire, which broke out on the top floor of the mall, was an electrical fault.

The authorities have opened criminal probes into causing death through negligence, breaches of fire safety and providing unsafe services.

A court on Wednesday ruled that the head of the company that managed the shopping centre and a security guard who failed to trigger the public warning system must remain in custody till May 25.