HEADLINE Russia orders out 60 US diplomats over spy poisoning affair

Russia orders out 60 US diplomats over spy poisoning affair 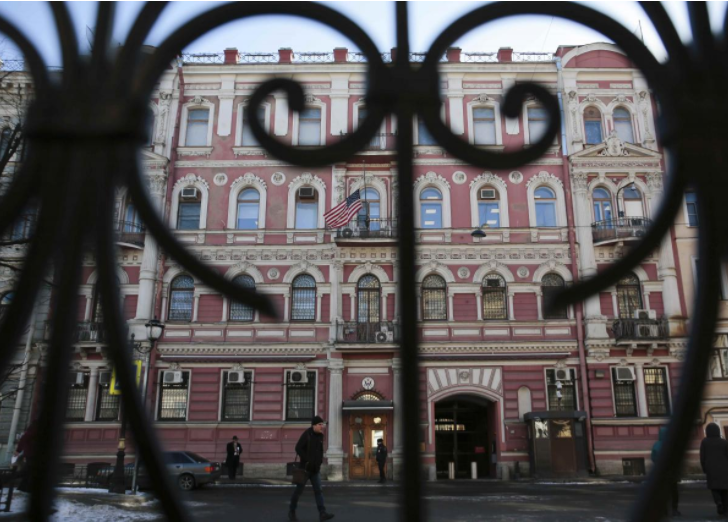 A view through a fence shows the building of the consulate-general of the US in St. Petersburg, Russia March 29, 2018. (Photo: Reuters)

Russia has ordered 60 US diplomats to leave by April 5, the foreign ministry said on Thursday, in a retaliatory move against Washington which expelled a similar number of Russian diplomats over the poisoning of a Russian spy in England.

The foreign ministry said it had declared persona non grata 58 diplomats in Moscow and two general consulate officials in Yekaterinburg in the row over the poisoning of former Russian double-agent Sergei Skripal on March 4.

Moments before the ministry announcement, Foreign Minister Sergei Lavrov said Russia would respond in kind to the mass expulsion of diplomats by Western governments which include, apart from the United States and Britain, most member states of NATO and the European Union.

“The measures would be reciprocal ... They include expulsion of the equivalent number of diplomats and they include our decision to withdraw our agreement to allow the United States’ general consulate to operate in St. Petersburg,” Lavrov told a briefing.

The attack on 66-year-old Skripal and his daughter, which Britain has blamed on Russian President Vladimir Putin and says was caused by a Soviet-era nerve agent Novichok left on the door of their home in England, has driven relations between Russia and the West to a new post-Cold War low.

Russia has denied involvement in the attack on the Skripals and says it suspects the British secret services are trying to frame Russia to stoke anti-Russian hysteria.

Skripal, a former Russian military intelligence who betrayed Russian agents to Britain and then was exchanged in a spy swap deal, is still in a critical condition from the attack.

His 33-year-old daughter was also in a critical condition though the English hospital where she was being treated said on Thursday that her condition had improved.