HEADLINE Russia's Lavrov calls on US to 'recognize reality' on Iran

Russia's Lavrov calls on US to 'recognize reality' on Iran 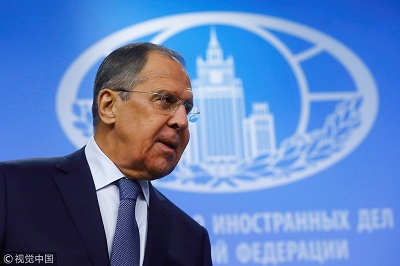 "We will continue to work with the aim of the United States recognizing reality," Lavrov said at an annual press conference in Moscow on Monday.

He added that US statements to end the deal "do not add optimism or stability."

On Friday, Trump said Washington will not reimpose nuclear sanctions on Iran for the moment, but would withdraw later this year unless the terms of the deal are changed.

Trump called on European partners to work with the US to "fix the deal's disastrous flaws."

Lavrov said it was "hard to say" what position European countries will have.

"They are starting to somehow, I believe, call on looking for compromises. This will be a slippery slope in a very dangerous direction," he said.

Russia's chief diplomat went on to warn that a withdrawal from the Iran nuclear deal will have a negative effect on the Korean Peninsula issue.

"If Kim Jong-un is required to stop [North Korea's] nuclear military program and, in exchange, is promised sanctions will be lifted then this is precisely the essence of the agreements between the world community and Iran," Lavrov said.

"If this arrangement is taken away and Iran is told: you remain within the framework of your obligations and we will reimpose sanctions – then put yourself in North Korea's place," he added.

Under the hard-won 2015 deal with Russia, the US, China, France, Britain, Germany and the EU, Iran agreed to curb its nuclear program in exchange for lifting a raft of international sanctions.

America's allies see the accord as the best way to thwart Iran's nuclear ambitions and as a victory for diplomacy.

Iran on Saturday rejected any modification of the deal after Trump's comments.