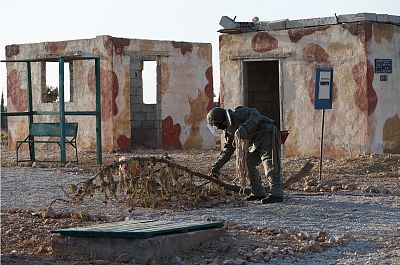 A picture provided by the Russian Defence Ministry on September 13, 2017 shows a Russian military combat engineer clearing mines on the outskirts of the northern Syrian city of Aleppo. (File photo: VCG)

Terrorists in Syria were found to be in possession of radio-electronic equipment made in Europe, the Russian military said in a statement on Friday.

"After killing five terrorists in Syria's al-Tanf Area, during examination of the place where the terrorists had been killed, the Syrian forces found a modern electronic warfare package made in Europe," the statement read.

In addition, the forces found a large amount of ammunition for small arms and Islamic State literature, according to the statement by the Russian Reconciliation Center for Syria, set up by the Russian Defense Ministry to oversee the implementation of deals between the rebels and the Syrian government.

Citing refugees who had managed to flee the U.S.-controlled al-Tanf close to Iraq and Jordan, the statement said that the militants were planning to break through the area "in the nearest future."

The facts showed that the U.S. trained and established groups of opposition militants, with the aim of undermining the peace process in Syria, the statement added.