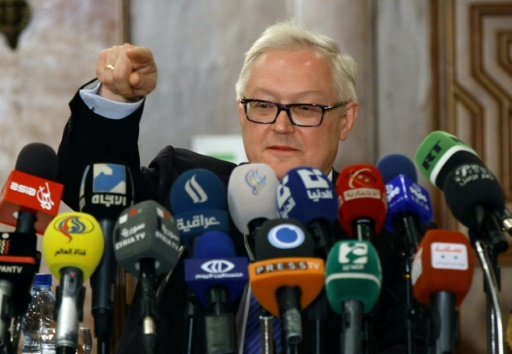 Russian deputy foreign minister Sergei Ryabkov accuses the US of "crossing the line" and fomenting the conflict in eastern Ukraine. (Photo: AFP)

Moscow warned Saturday that Washington was encouraging "new bloodshed" in eastern Ukraine by its decision to provide the ex-Soviet nation with lethal weapons, while Kiev expressed the hope arms supplies could help contain Russia.

The stern Moscow warning came after a new ceasefire deal between Ukraine and pro-Russian rebels went into effect from midnight Saturday ahead of the New Year and Orthodox Christmas holidays.

In a strongly-worded statement Russian deputy foreign minister Sergei Ryabkov accused the United States of "crossing the line" and fomenting the conflict in eastern Ukraine, a region known locally as Donbass.

"Kiev revanchists are shooting at Donbass every day, they don't want to conduct peace negotiations and dream of doing away with the disobedient population. And the United States has decided to give them weapons to do that," Ryabkov said.

Another deputy foreign minister, Grigory Karasin, said the US move would undermine efforts to reach a political settlement in Ukraine.

He said Washington chose to support "the party of war" in Kiev.

"This is unacceptable," he added.

He reiterated Russia's position that Ukrainian authorities should negotiate with Kremlin-backed rebels through "honest and direct dialogue."

"There is no other way to solve the internal Ukrainian conflict."

The US State Department announced Friday that Washington had "decided to provide Ukraine enhanced defensive capabilities as part of our effort to help Ukraine build its long-term defense capacity."

An ABC news report before the announcement said the US planned to supply Ukraine with anti-tank missiles, including possibly the advanced Javelin system, citing four State Department officials.

"The total defense package of $47 million includes the sale of 210 anti-tank missiles and 35 launchers," the report added.

"Our strategic partners - the United States - have definitively made up their mind: as a sovereign state, Ukraine has a legitimate right to buy and receive defensive weapons including lethal weapons," he said.

"Weakness provokes the aggressor. Strength contains him," he added.

Despite a new ceasefire, Ukrainian military spokesman Vasyl Labay accused rebels of shooting at government positions and seeking to thwart the latest truce.

Since the start of the conflict over three years ago more than 10 such ceasefires have been declared but all of them have been violated.

Ukraine and its Western allies accuse Russian President Vladimir Putin of funnelling troops and arms across the border to fan the flames of the conflict as punishment for Kiev's pivot toward Europe.

More than 10,000 people have died and almost 24,000 have been injured since the pro-Russian insurgency broke out in eastern Ukraine in April 2014.

A UN report said this week that 220,000 children are at imminent risk of being hurt by mines and other explosive weapons in eastern Ukraine, one of the most mine-contaminated places on earth.

Moscow has denied the claims of involvement, saying the conflict is Ukraine's internal affair and Kiev should negotiate directly with separatists.