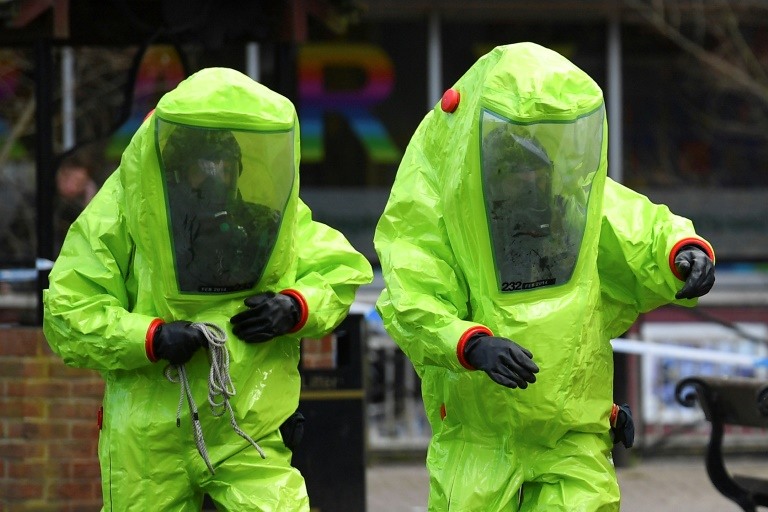 Emergency services and investigators attended the site where Yulia Skripal and her ex-spy father Sergei were found poisoned in Salisbury.(Photo: AFP)

The Russian woman who was poisoned in Britain last month with her former spy father said Thursday she was recovering, in her first public statement in a case that has sparked a major diplomatic crisis between Moscow and the West.

"I woke up over a week ago now and am glad to say my strength is growing daily," Yulia Skripal was quoted as saying in comments released by the police.

The UN Security Council was due later Thursday to discuss the spiralling diplomatic crisis sparked by the poisoning of Yulia and Sergei Skripal.

Yulia Skripal said she had found the incident "disorientating", without providing any further details on the attack in her short statement.

She and her father, a former double agent, were found in a critical condition on a public bench in the English city of Salisbury on March 4.

Britain blames Russia for incident, but Moscow has furiously denied the charges.

The crisis has led to a wave of tit-for-tat expulsions of diplomats between Moscow and the West.

Russia on Thursday demanded an "objective" probe into the case ahead of UN Security Council talks.

Russian state television earlier aired an unverified recording of a phone conversation between Yulia Skripal and her cousin who lives in Moscow.

In the call, a woman introducing herself as Yulia Skripal said she was expecting to be discharged from hospital soon and that her father Sergei was "fine".

The hospital where the pair are being treated said in their latest update last week that Sergei remained in a critical condition.

"It will not be possible to ignore the legitimate questions we are asking," he warned hours before the UN meeting.

The Security Council "should look at this problem in every aspect and, I hope, objectively," Lavrov said.

Early Thursday morning some 60 US diplomats who were ordered out of Russia left their embassy compound in Moscow.

Russia called a meeting of the global chemical watchdog on Wednesday over the Salisbury incident, but failed in its bid to join the probe by the Organisation for the Prohibition of Chemical Weapons (OPCW).

Russia then requested the Security Council meeting on Thursday at 1900 GMT in New York.

Speaking in Moscow, Lavrov called for a "substantial and responsible" probe, while alleging the Skripal case was used by Britain as "a pretext, either made up or staged, for the groundless expulsions of Russian diplomats".

President Vladimir Putin said on a visit to Ankara on Wednesday that "common sense" must prevail to avoid "this damage in international relations".

Moscow was unable to get the required two-thirds of votes from members to approve a joint investigation at Wednesday's OPCW meeting.

Facing off in The Hague

Wednesday's bid to secure a joint probe saw a day of bitter rhetoric between Moscow and Britain and its western allies.

"The purpose of Russia's ludicrous proposal at The Hague was clear –- to undermine the independent, impartial work of the international chemical weapons watchdog," he said, adding that Moscow's main goal was "to obscure the truth and confuse the public."

Britain is carrying out its own probe, with independent technical assistance from OPCW experts.

Sergei Naryshkin, head of Russia's SVR foreign intelligence, warned Wednesday that both sides must avoid tensions escalating to the dangerous levels of the Cold War.

He called the affair a "grotesque provocation ... crudely concocted by the British and American security services."

OPCW experts have already taken on-site samples which are being analysed in The Hague, as well as in four other certified laboratories. The watchdog said it expected the results by early next week.

But in a move hailed as a vindication by Moscow, the British defence laboratory analysing the nerve agent revealed Tuesday that it could not say whether the substance came from Russia.

The Kremlin immediately demanded an apology from May and her government for implicating Putin in the nerve agent attack, saying this "idiocy has gone too far."

On Thursday, The Times newspaper cited British security sources saying they believe they have pinpointed the location of a Russian laboratory where the nerve agent used in Salisbury was manufactured.