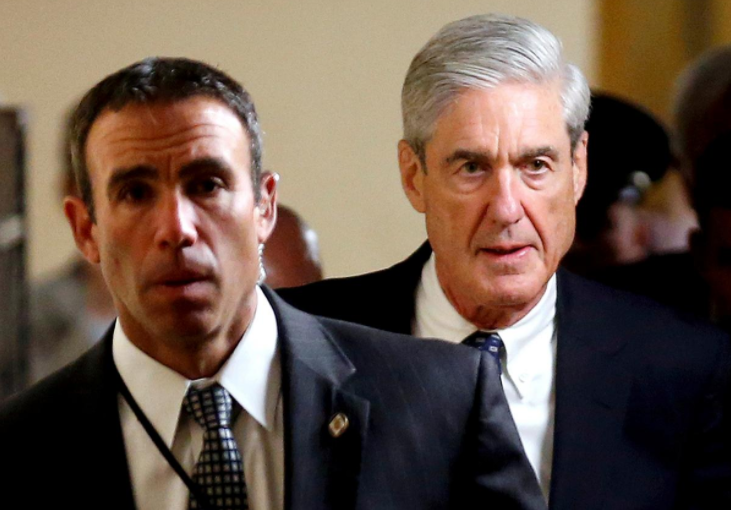 Special Counsel Robert Mueller (R) departs after briefing members of the US Senate on his investigation into potential collusion between Russia and the Trump campaign on Capitol Hill in Washington, US, June 21, 2017. Photo: Reuters/Joshua Roberts

Special Counsel Robert Mueller’s indictment of 13 Russian individuals and three organizations for allegedly interfering in the 2016 US presidential election sets the stage for the prosecution of Americans who may have helped the Russian effort, some legal experts said.

Deputy Attorney General Rod Rosenstein told reporters on Friday there was no allegation in the indictment that any American knew about the alleged scheme. It said Russians did contact “unwitting” members of the campaign of now President Donald Trump in a bid to support him while denigrating his opponent, Democrat Hillary Clinton.

The indictment said the Russians conspired “with persons known and unknown,” which could include Americans.

“While they went to great pains to say they are not indicting any Americans today, if I was an American and I did cooperate with Russians I would be extremely frightened today,” said former federal prosecutor Patrick Cotter.

The White House took a different view, issuing a statement saying that Trump had been briefed on the matter and was “glad to see the Special Counsel’s investigation further indicates there was NO COLLUSION between the Trump campaign and Russia.”

Mueller has been silent on where the probe is headed. It has so far led to guilty pleas from Trump’s former national security advisor and a one-time campaign aide to lying to the Federal Bureau of Investigation, as well as indictments of his former campaign manager Paul Manafort and Manafort’s business partner Rick Gates.

Moscow has denied meddling in the election. Leah Litman, a law professor at the University of California, Irvine, said that meant the Russian government was extremely unlikely to turn over any of its nationals for US prosecution. There is no formal extradition agreement between the United States and Russia.

There is no crime called collusion in US law, but former federal prosecutor Randall Eliason, now a professor at George Washington University Law School, said the same conduct is often covered by the offense of conspiracy.

“The fact is that collusion is potentially a crime,” Eliason said. “This has always been clear, and it is even clearer now.”

The indictment alleges a scheme to impede the functioning of the US Federal Election Commission and other government agencies. Prosecutors also accuse the Russians of opening bank accounts under false names and unlawfully using stolen identities of Americans to post on social media in support of Trump.

To charge an American with conspiracy, legal experts said, Mueller would need to show that person was aware the Russians were trying to interfere in the election and knowingly aided them.

For example, people who participated in activities to support the Trump campaign could be charged if they knew Russians had organized them to help sway the vote. If an American helped direct the Russian acts, that could lead to charges as well, said Harvard Law School Professor Alex Whiting.

Some experts said Friday’s indictment does not indicate Mueller’s probe was broadening.

Bill Jeffress, a criminal defense lawyer at Baker Botts, said he thought it was significant that Mueller made clear that members of the campaign only dealt with Russians unwittingly.

“If they had enough evidence that an American were complicit they would have included it,” said Jeffress.

But Cotter said the narrative set forth in the indictment could easily include many more participants.

“The net is tightening,” he said. “They have moved up a whole other step on the ladder.”