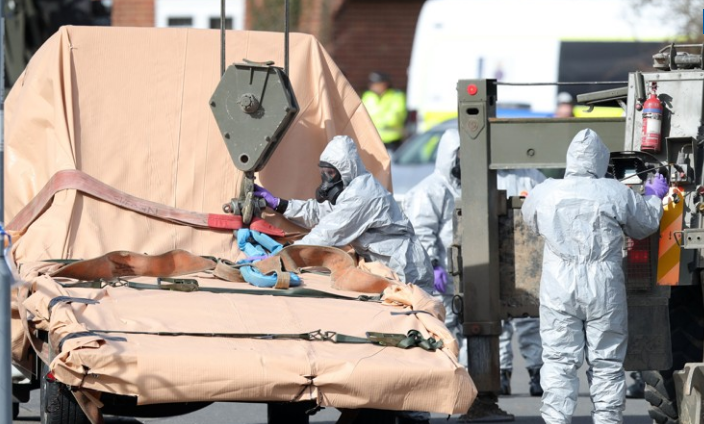 Russia will "certainly" expel British diplomats in a tit-for-tat response to Britain's decision to send 23 Russians home over the poisoning of a former spy, the foreign minister said Thursday.

Sergey Lavrov, speaking in remarks carried by the RIA Novosti news agency, said the move would come "soon," but added Moscow would inform London via official channels before publicly announcing its countermeasures. Lavrov said British accusations of Moscow's involvement in the poisoning are intended to distract public attention from Britain's troubled exit from the European Union.

Amid escalating tensions with the Kremlin, British Foreign Secretary Boris Johnson said Thursday that Russia targeted former spy Sergei Kripal and his daughter with a military-grade nerve agent to make it clear that those who defy the Russian state deserve to "choke on their own 30 pieces of silver."

Johnson told the BBC there was a message in the "smug, sarcastic response" from Moscow after Britain demanded an explanation for how a nerve agent developed by the Soviet Union's Novichok program was used on the Skripals in the English city of Salisbury. Johnson said the Russian government wants "simultaneously to deny it and yet at the same time to glory in it."

"The reason they've chosen this nerve agent is to show that it's Russia, and to show people in their agencies who might think of defecting or of supporting another way of life, of believing in an alternative set of values, that Russia will take revenge," Johnson said.

Relations between Britain and Russia have fallen to levels not seen since the Cold War after Prime Minister Theresa May on Wednesday expelled 23 diplomats, severed high-level contacts and vowed both open and covert action following the attack.

Russia said it would respond soon. Kremlin spokesman Dmitry Peskov wouldn't reveal how Russia will retaliate, but said the decision will come from President Vladimir Putin, "and there is no doubt that he will choose the option that best reflects Russian interests."

"We are worried by this situation" and will work patiently to express Russia's position on the international stage, Peskov said.

May announced the sanctions against Russia in a speech to the House of Commons after Moscow ignored a deadline to explain its links to the attack on Skripal, an ex-Russian agent convicted of spying for Britain, and his daughter, Yulia. They remain in critical condition in a hospital in Salisbury, southwestern England, after being found unconscious March 4.

As a result of the suspension of high-level contacts with Russia, Britain canceled an invitation for Lavrov to visit the country. British ministers and royals won't attend the soccer World Cup this summer in Russia, May said.

May also said Britain would clamp down on murky Russian money and strengthen the government's ability to impose sanctions on those who abuse human rights, though she gave few details.

Britain is also trying to build international consensus for a unified Western response, saying the attack in Salisbury is just the latest example of Russia's disregard for international norms on the rule of law. US President Donald Trump and French President Emmanuel Macron are among the world leaders who have expressed solidarity with Britain.

Britain has kept France closely informed of the evidence gathered by British investigators and "elements proving Russia's responsibility in the attack," Macron said.

"France's solidarity (with Britain) is unambiguous," his office said. "The president condemned the attack as unacceptable and assured May of France's full solidarity with the United Kingdom."

Soldiers wearing protective clothing prepare to lift a tow truck in Hyde Road, Gillingham, Dorset, England as the investigation into the suspected nerve agent attack on Russian double agent Sergei Skripal continues Wednesday March 14, 2018. The army cordoned off a road in Dorset on Wednesday as they investigated the attack on Sergei Skripal and his daughter Yulia. Authorities have cordoned off several sites in and near Salisbury, 145 kilometers southwest of London as part of their probe. (Photo: AP)