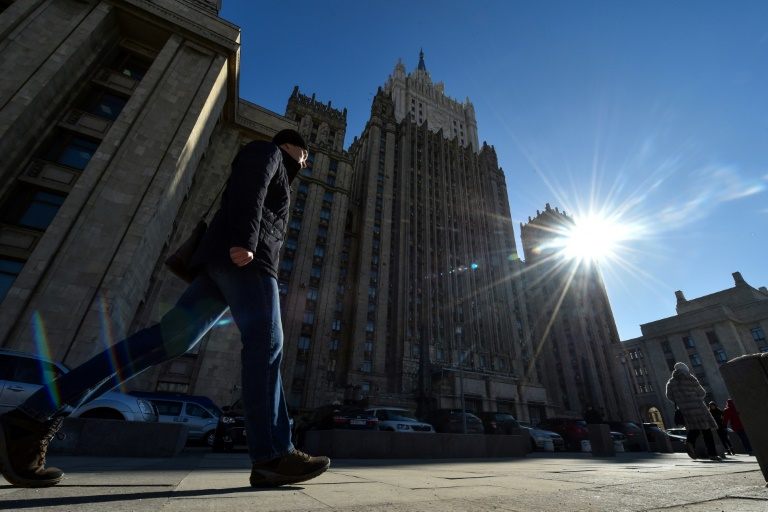 A man walks past the Russian Foreign Ministry headquarters in Moscow on March 29, 2018. Russia is facing a "global wave of revulsion" in response to the nerve agent attack on a former Russian spy, Britain's Foreign Secreta

Yulia Skripal, hit in a nerve agent attack that has chilled relations between Russia and the West, came out of critical care on Thursday following a swift improvement in her health.

The 33-year-old daughter of former Russian double agent Sergei Skripal is "improving rapidly and is no longer in a critical condition. Her condition is now stable", said the hospital treating the pair since the March 4 attack.

The attack on the Skripals in the southwestern English city has been met with a major response that has seen more than 150 Russian diplomats expelled from countries around the world.

British authorities have blamed Moscow, which denies any involvement, and said a Soviet-designed nerve agent dubbed Novichok was used in the poisoning -- the first use of chemical weapons in Europe since World War II.

"I'm pleased to be able to report an improvement in the condition of Yulia Skripal," said Doctor Christine Blanshard, the Salisbury hospital's medical director.

"She has responded well to treatment but continues to receive expert clinical care 24 hours a day."

British counter-terror police on Wednesday said the Skripals first came into contact with a nerve agent at his Salisbury home -- with the highest concentration on the front door.

British police said around 250 counter-terrorism detectives are working on the case, which could continue for months.

Around 500 witnesses have been identified and police are looking through more than 5,000 hours of security camera footage.

"We believe the Skripals first came into contact with the nerve agent from their front door," Dean Haydon, Britain's counter-terror police chief, said on Wednesday.

"Traces of the nerve agent have been found at some of the other scenes detectives have been working at over the past few weeks, but at lower concentrations to that found at the home address."

Investigators had sealed off the bench where the Skripals were found, a pub and restaurant the pair visited, and the grave of the former spy's wife.

The BBC's security correspondent Gordon Corera said the highest concentration was found on Skripal's door handle and could have been administered through a "gloopy substance which could have been smeared on".

It would explain why the nerve agent may have been found on Skripal's car or the restaurant in which they had eaten, he added.

However, in persistent agents like the better-known VX, contamination is generally through the skin and the full effects are not immediate.

"In situations like the one involving the Skripals, it is likely there would have been delayed onset of symptoms like headaches, feeling nauseous, feeling very weak and possibly vomiting, after the typical exposure occurs through skin contact," he said.

Skripal sold secrets to Britain and moved there in a 2010 spy swap. His daughter was visiting from Russia.

Moscow is facing a "global wave of revulsion" in response to the nerve agent attack on a former Russian spy, Britain's Foreign Secretary Boris Johnson said.

"The Kremlin underestimated the strength of global feeling," Johnson said at a speech late Wednesday in London.

"When years of vexation and provocation have worn the collective patience to breaking point, and when across the world -- across three continents -- there are countries who are willing to say enough is enough."

While the Skripals remain in hospital, a police officer who responded to the attack was discharged last week.

International experts from the Organisation for the Prohibition of Chemical Weapons arrived in Salisbury on March 20 to verify Britain's findings.

Britain has been backed by the NATO defence alliance, the United States, 18 European Union nations and other countries in expelling Russian diplomats over the attack.

Moscow has already ordered 23 British diplomats to leave Russia in response to the same move by London, and is expected to take further retaliatory measures against other countries.

Meanwhile more than £880 million ($1.25 billion, one billion euros) of British property claimed to have been bought by Russians with suspect money is to be investigated by a parliamentary inquiry.

The Treasury Select Committee said it will probe the scale of economic crime in Britain following claims the country -- in particular the London property market -- has become the "destination of choice" to launder money.